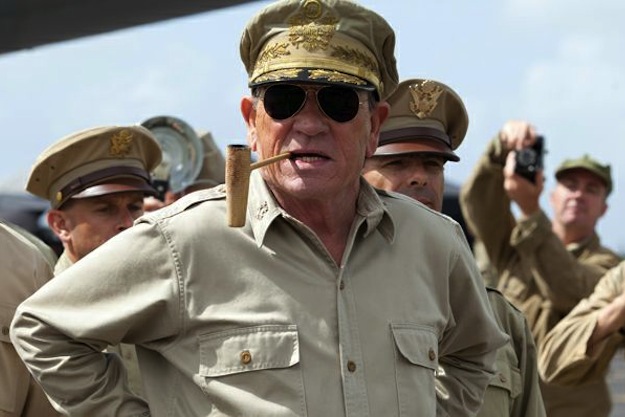 “Happily,” Tommy Lee Jones says, “I bear no resemblance to Douglas MacArthur at all.”

And if you’re going to portray the World War II general nicknamed “American Caesar” by some historians, in the movie “Emperor,” that’s a liberating thing.
“That job is done by the corncob pipe and the aviator sunglasses. And the hat, with LOTS of gold on it.”

Most people not remember or even know “who the man was, Americans being ignorant of their own history,” Jones says. And it’s been difficult even for historians to get under the skin of the “real” General of the Army, victor in the Pacific, head of the occupation of Japan and the man who conceived the daring Inchon landings that turned the tide in the Korean War.

“The only recordings of his spoken voice are speeches, on public occasions, before large numbers of people,” Jones says. “Very controlled, very impressive because he knew he needed to impress.”

Even though both MacArthur and Jones were born in Texas, that was no help, because “MacArthur was born on an Army base,” so no Texas accent Jones could build on. The voice “was very formal, oratorical. Pretentious, patrician, also. The accent seems narcissistic, too. There aren’t any candid photographs of him, either. Very much in control of his image.”

The MacArthur that Jones delivers in “Emperor” is off the cuff, cagey and salty – a career soldier who swears and imperiously sets his own foreign policy, brushing off Washington, working out whether or not to prosecute Emperor Hirohito for war crimes. In the film he gives the job to a trusted aide, General Bonner Fellers (Matthew Fox), a real historical figure with a Hollywood-invented romantic past with a Japanese woman.

“It’s a love story, East meeting West told in personal terms, with all this history as a backdrop,” Jones explains.

Jones, fresh off the Oscar nomination for playing another historical figure, Congressman Thaddeus Stevens in “Lincoln,” happily took on playing MacArthur for that love story in “Emperor” because “if you realize what MacArthur did and why, you have a better understanding of both countries, and the better side of both countries.”

At 66, hasn’t aged out of the “rascally” label film scholar David Thomson slapped on him in his “Biographical Dictionary of Film.” But in recent years, he’s made his living off the irascible persona he carved out of his Oscar-winning character in “The Fugitive” and “U.S. Marshals,” so much so that when cameras pan to him not laughing in the audience at Golden Globes, and to him cracking up when Oscar host Seth MacFarlane began the Oscars telecast with, “And the quest to make Tommy Lee Jones laugh begins now.”

His crusty side – notorious in interviews – only appears when asking about the movie he’s about to direct and co-star in with Meryl Streep, Hillary Swank and Tim Blake Nelson. “The Homesman,” which will film in April in New Mexico, is set in the 19th century, a quest tale about a pioneer woman and a mining “claim jumper” who escort a trio of insane women from Nebraska to Iowa. Whatever you do, don’t call it a “Western.”

“This stupid label — ‘Western’ — it’s hard to get around that,” he grouses. “There are a lot of people, who, once they teach themselves to pronounce that word ‘Western,’ think they understand the movies.” A master of that film idiom, with “Lonesome Dove,” “The Missing,” “The Three Burials of Melquiades Estrada” and “The Good Old Boys” under his hat, Jones objects to the way the label “Western” limits the story, both for possible film financiers and for moviegoers. He’s got enough to fret over, co-writing and directing the film, without labels.

“The undependability of the weather is the biggest thing you deal with when you film something like this,” he says. “We want to snow on the day we need it to snow. And that’s not going to happen. Whoever’s in control of the weather doesn’t pay much attention to me and my requests about that. We have all these period sets to build, pretty far apart, in Northeastern New Mexico.

“I don’t think we’re behind, but I know for sure we’re not ahead.”

1 Response to Tommy Lee Jones talks “Emperor” and Westerns and his new directing job, “The Homesman”