Next interviews: Ken Scott and Patrick Duard from “Starbuck” 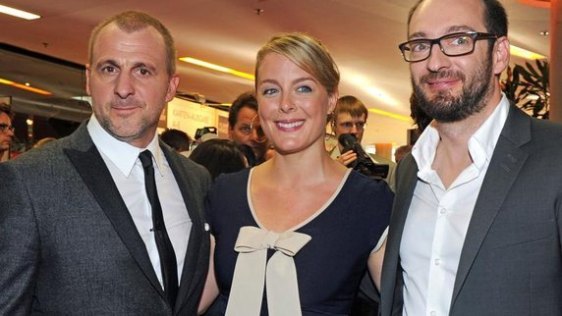 That’s Julie LeBreton in between Huard, star, and Scott, director, of “Starbuck,” a French-Canadian delight that is rolling into select cities over the next month. My review of it is here.

An adorable movie about a lazy lout (Huard) who finds out his girlfriend (LeBreton) is pregnant at about the same time he discovers that those sperm bank donations he made 20 years ago have borne fruit — 533 kids, who are suing to find out his identity.

It’s touching, it’s very funny. Vince Vaughn and Cobie Smulders are starring in the inevitable Hollywood remake, which Scott just filmed and which will be out later this year.

Questions for Huard and Scott? I’m interviewing them over the weekend.