Movie Review: “The Turn of the Screw” becomes “The Turning”

Posted on January 25, 2020 by rogerinorlando 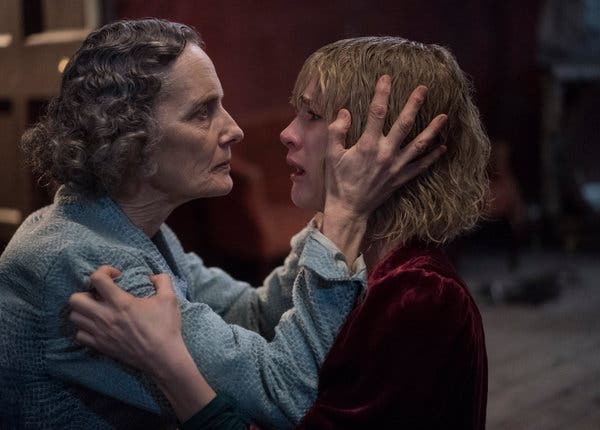 It may be set in the post-Kurt Cobain suicide 1990s, but you don’t have to be an American Literature major to spy “The Turn of the Screw,” the novel by Henry James, in the Gothic horror film “The Turning.”

The phrases “haunted nanny” or “spooked governess” are a dead giveaway to any “Jeopardy” watcher. The least boring novel by the 19th century novelist, infamous for his paragraph-long/parenthetical-digression sentences, has been the adapted for the screen over a dozen times over the decades.

Instantly-recognizable it may be. And nailing down the tone has rarely been a problem. “Gloom” isn’t the only approach, but it’s the safest when you’re dealing with a young governess (Mackenzie Davis of “The Martian”) trying to teach a motherless child of wealth (Brooklyn Prince of “The Florida Project”) and cope with her touchy housekeeper (Barbara Marten) and possibly-psychotic teen brother (Finn Wolfhard of “It” and “Stranger Things”).

Is governess Kate seeing ghosts in mirrors, windows and the bottom of the pool? Are the bumps in the night she’s hearing malevolent spirits? Is Miles (Wolfhard) out to cause her harm?

Or is it all in her head, because we’ve met her mother (Joely Richardson) in the asylum and even in Henry James’ day “It runs in the family” was totally a thing.

But music-video director turned music movie (“The Runaways”) director Floria Sigismondi does a poor job of doling out that doubt, and rather disastrously mishandles the finale. The “gotcha” moments play as over-familiar tropes, even if their inspirations were more potent in James’ day, But even back then people had to know he was no Edgar Allan Poe.

Kate is a young woman who leaves her teaching job, her roommate and her mad-artist mother in the mental hospital to take on this gig teaching the scion of rich parents who died some time before.

“You don’t know what it’s like to grow up without parents,” she tells the roomie (Kim Adis). As we take a gander at Kate’s mother, we figure she’s just speaking metaphorically. Mom’s not all there.

Housekeeper Mrs. Grose warns her that she’ll be dealing “with thoroughbreds,” and to try and act like it. Flora (Prince) is only mildly precocious, with a practical joking streak. So much for superior breeding.

The cheap shocks and general creepiness, hinted at before, gain momentum with his return. Kate hears about previous hired help who have died. And she stumbles into the diary/teaching progress planner of her predecessor governess. Her anxiety and nightmares increase. 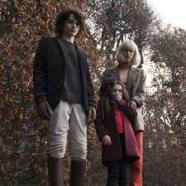 There’s a bottom-line to any horror tale, and that is “Does it deliver frights?” I counted one somewhat hair-raising moment, and a whole lot of jolting close-ups accompanied by a shrieking soundtrack and a scattering of Ms. Davis going all wide-eyed moments.

The viewer’s impulse is to fear for Kate, to be enraged at or suspicious of Grose and Miles, and wonder what Flora’s deal is. Is she victim or ringleader?

But there’s no terror, here. None.

Perhaps, before one more version of this novel is committed to the screen, some enterprising film executive with the power to secure financing or “green light” the project should read the bloody book and figure out if it has any currency in the age of “Paranormal Activity” or “Halloween” sequels or reboots.

Because damned if I can think of a filmed version of it that works, and I’ve seen a few.

Credits: Directed by Floria Sigismondi, script by Carey W. Hayes and Chad Hayes, based on “The Turn of the Screw” by Henry James.  A Universal release.