Spring Break – it’s every bit as much fun as you think it is. Until it isn’t.

And if his cameras – cell phone video inserts blur through the narrative – focus on pert bikini bottoms and heaving, inviting crotches, on girl-on-girl make-out sessions and on topless, almost faceless masses shouting that drunken coed mating call — “Woohooooooo” — well that’s just him kicking himself for what he missed.

It’s “Girls Gone Wild” meets the female-gangster picture “Set It Off.” Korine has cooked up an impressionistic bacchanal of what spring break has become and those who made it that way – college girls, proving to each other and themselves that they’re as bad and promiscuous as any frat boy hip hop.

Our quartet of Kentucky College coeds are thinly drawn in. Faith (Selena Gomez) is the religious one, and the spiritual seeker, who claims she only wants “to see some place different.”

Britt, Candy and Cotty (Ashley Benson, Vanessa Hudgens and the director’s wife, Rachel Korine) are a little more streetwise. That’s why they take the news that they don’t have the cash necessary to make the Florida trek badly. And they’re not sitting still for it.

They find ski masks, arm themselves, steal a car and knock over a crowded diner. It says something of how shaky Faith’s faith is that she isn’t shocked by this, that she’s as willing as anybody else to get out of school by any means necessary.

In St. Petersburg Beach and environs, they find “where we were meant to be” – a non-stop party where the sexual degradation is so ingrained that they don’t even notice it. They’re young. They’re hot. They’re in control.

And then they’re busted for being in the wrong party and a gangster and would-be rapper named “Alien” (James Franco) bails them out. What might he have in store?

“Spring Breakers” is no “21 and Over” or “Pineapple Express.” The laughs aren’t obvious, and every situation is tinged with a darkness. We’re waiting for a rape, an overdose, an accident. Lines are repeated, endlessly, the way drunken college kids pick up on a phrase and beat it to death – “Spring break. Spring BREAK. Spring break FOREVER,”

The story is easy to follow, harder to justify, as motivations seem as murky as the plot, which is very much a dreamy haze of parties, where the frat boys pour beer down funnels to girls as they yell, “Take it like a stripper.”

Franco affects a Southern drawl and makes Alien a wildman and something of a gangster success. But his motives are hidden.

Gomez has the only real female character to play, narrating the story in the lies she tells her grandmother by phone about what a “spiritual” place this is. The others are under-motivated set dressing, hired for the way they fill a bikini, and the players – Hudgens and Benson especially – treat the movie as some sort of hipster rite of acting passage. Skin will show (Korine’s wife shows the most), bad behavior indulged.

And we’ll have no more “High School Musical,” “Wizards of Waverly Place” or “Pretty Little Liars” offers to our agents, thank you.

(James Franco breaks down “Spring Breakers” for you — right here). 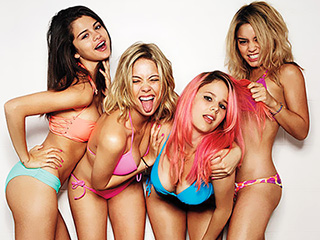 (Read “Spring Breakers,” Don’t get the wrong idea, for more about the movie).