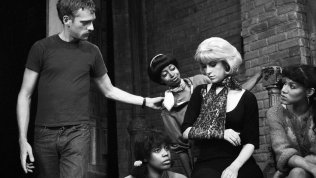 It was the late 1980s when the idea folks at Walt Disney Animation had their first meeting with the man who was to bring Disney Animation back from the dead. After an insistent courtship by Jeffrey Katzenberg, Mr. “Little Shop of Horrors,” Howard Ashman, was taking a look at the story problems vexing the team starting production on “The Little Mermaid.”

“He literally taught us how to tell a story with a song,” one animator present recalls. Ashman, a lyricist and playwright by trade, broke down the need for “a want song” in the first act, which became Ariel the Little Mermaid’s sweeping “Part of Your World” in the film, a song he had to threaten to quit the film over to keep Disney’s suits from cutting.

The villain? Let’s base her on Divine, the drag queen John Waters made famous in “Pink Flamingos,” “Polyester” and “Hairspray.” Give her a real “show stopper.” Cast an old broad of Broadway to play her.

And Ariel needs a sidekick. We’ve got this crab…

“Why not make him Jamaican?”

Michael Eisner and Jeffrey Katzenberg get much of the credit for “saving” Disney in the ’80s. But as the documentary “Howard,” directed by “Beauty and the Beast” producer Don Hahn makes clear, it was their most inspired hire that made the Mouse matter again.

Most anybody watching the finished “Little Mermaid” could pick a moment where “it” happened. Grown women and men burst into tears at Jodi Benson singing the soaring “Part of Your World.” Children sat slack-jawed in awe of evil Ursula (sung by Pat Carroll) as she cried crocodile (OK, octopus) tears over those “Poor, Unfortunate Souls.”

And when Sebastian the crab (Samuel E. Wright) Jamaican-vamped through lyrics like “When the sardine begins the beguine it’s music to me,” we were hooked, the die was cast and Disney had the first of a string of blockbusters that took the company out of the crapper and put it on course to become the world’s greatest and most valuable entertainment brand.

“Howard” is an over-due and delayed (it was finished in 2017) appreciation of the musical theater genius who lit up Broadway and then announced that “the last great place to do Broadway musicals is animation,” and put his mind to “Mermaid,” “Aladdin” and “Beauty and the Beast,” the Holy Trinity of the Disney Animation Revival.

It’s a warm story with a tragic end, taking us from young Howard’s early enthusiasm for staging “vignettes” for his family (sister Sarah Gillespie is a major interview subject here), his high school and college immersion in the greasepaint of the theater, his rise to stardom and his untimely death, a gay man killed by the plague of the ’80s and ’90s, AIDS.

We hear a lot from his main writing partner, Menken, from various Broadway and Disney folks in awe of his talent, slow to see his illness, quick to recognize, in his frantic final months, that “the work really did keep him going.”

Archival TV interviews of him capture him in the middle of his early Off-Off Broadway success, starting his own theater company, turning a Kurt Vonnegut story, “God Bless You, Mr. Rosewater” into a musical, conjuring up a blockbuster out of the daft cult horror film “Little Shop of Horrors,” putting everything he had — money included — in adapting the dark comedy about beauty pageants, “Smile,” for the stage — only to see it fail.

But one of the stars of his big failure was remembered when he signed on at Disney. Jodi Benson became a household name thanks to “The Little Mermaid.”

Ashman’s personal life is explored, from childhood through the adult relationships — both nurturing and self-destructive — that shaped him. The irony of him doing press, and a major public Q & A about “Mermaid” on the day he was diagnosed, stings.

We see footage of Ashman coaching actors through songs and most gloriously, hear his “demo” versions of those songs — singing to Menken’s accompaniment on piano through “Poor Unfortunate Souls” and “Prince Ali” (from “Aladdin”) and others.

“Howard” doesn’t reinvent the documentary biography, and once we get past his college friends, it can seem seriously Disney “in house.” But it is still a lovely appreciation of the man and his singular talent, wit that he channeled into lyrics that have become a monument to his genius in the decades since his death.

On the screen, on the stage, and back on the screen again, “tale as old as time, song as old as rhyme” still brings viewers to tears, the ultimate testimonial to a mercurial talent taken away too soon.

Credits: Written and directed by Don Hahn. A Disney+ release.