Don’t get your Tommy Johns (women’s, or men’s edition) in a titillated twist.

The come-on for “Clementine,” which could be “licentious young lesbians libidinously lead us on,” is just that, the old bait-and-switch. It’s a little more high-minded than softcore, even if it has the plot and payoff of nothing more than a turgid tease.

We meet Karen (Otmara Marrero) as she awakens to sweet nothings being whispered in her ear.

What do we call that, kids? PROJECTION. The unseen artist “D” summarily dumps poor, pretty young Karen, changes the locks and keeps their shared Lab beyond her reach.

Damn her, anyway. That’s what Karen figures. But she takes a lying “I’m at the lake house” voice mail seriously. Showing up with no one there, Karen breaks in and proceeds to do a little revenge house-sitting.

Nothing that destructive. But she’s going to use this place, kick back, snoop around (plenty of evidence of Ms. D’s prior and probably current conquests). Maybe have a row in the boat, sunbathe on the dock.

But there’s this damned teenager already parked there. “Lana” (Sydney Sweeney of TV’s “Sharp Objects” and “The Handmaid’s Tale”) says she’s 19 and doesn’t look it.

She says she has a dog, but Karen doesn’t believe it. And yet she drives Lana around, in the dark, while they look for “Bingo.”

BTW, “no one actually names their dog ‘Bingo,'” she grumps.

But there is a dog, and there’s something about this pushy teen, something in her “Why would I lie about that?” comebacks, her “I’m gonna be an ACTRESS” aspirations, piques Karen’s interest.

The much younger woman is seeing how it feels to be the “older” woman. We don’t see it, but we can guess that maybe she’s wincing in recognition of her own MO thrown back in her gorgeous face — young, beautiful and I know it, using my powers of attraction over an older woman.

“It’s funny how things matter so much when you’re young…You’re only old when you know what you want. And then you can’t get it.”

She even explains D’s paintings, which hang all over the house, in a dismissive way D herself must have used on her once.

“It’s more about the process than the result.”

How many quasi-talented hustlers with a brush used that one?

There’s sharing and flirtation, and then a handyman (Will Brittain of “Kong: Skull Island”) shows up, test the older woman’s patience and the younger one’s commitment to possibly experimenting with same sex sex. 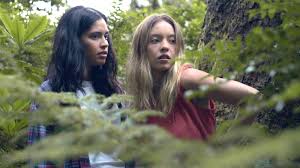 The players are more poker-faced than alluring and mysterious. Backing away from the titillation at that late stage seems a cheat. Maybe Karen’s older and wiser, but brazen Lana seems a bit of a bust as a vamp.

There are mysteries, dramatic confrontations, and there’s even that old cliche, Chekhov’s “pistol” present in the first act which the rules say, must play a role in the third act.

If you read enough into “Clementine,” you can almost talk yourself into thinking there’s more to it than there is. But if Oscilloscope Labs has it, they must have seen the same undercurrents I did.

And they knew there are tougher things in movie distribution than talking people into seeing a “thriller” with two lithe young lesbians at its heart.