Netflixable? A famed Mexican singer redeems himself, post mortem, in “Como Caido del Cielo (As Fallen from the Clouds)”

Posted on December 28, 2019 by rogerinorlando

The dashing figure of singer, actor and icon Pedro Infante still looms large enough in Mexican pop culture as to inspire fresh appreciations of his talent.

Sometimes, the reference can be oblique, in animated form (“Coco”). Sometimes, it’s more direct, but not anybody’s idea of a screen biography. That’s where the musical comedy “Como Caído del Cielo” resides, a lighthearted but underwhelming fantasy built around a legend, trading on his celebrity, his talent and his reputation as a womanizer.

Yes, it was a different era. Infante died in a plane crash in 1957. And yes, he “owned” it, as the kids say today. The guy starred in a movie titled “Dice que soy Mujeriego” (“They call me a ‘Womanizer’) for heaven’s sake.

That’s almost where we meet Infanté (Omar Chaparro). He is dead, but in limbo instead of heaven, singing his ranchera ballads to “my audience,” which still exists, if only in his mind.

The decision-makers in Heaven would love to be rid of him. He was famous and his songs were romantic classics, but he himself something of a rotter. “You did too much good to rot in Hell,” the angels decide (in Spanish, with English subtitles).

The angels (Roger Montes, Itza Sodi) decide to bring him back to Earth, let him improve his “record” enough to get him into heaven. It’s a “Heaven Can Wait” remake, of sorts, with Pedro taking on the guise of another womanizing Pedro, a Pedro Infante impersonator who has been in a coma for 90 days, bankrupting the motorcycle police woman (Ana Claudia Talancón) who is his wife in the process. 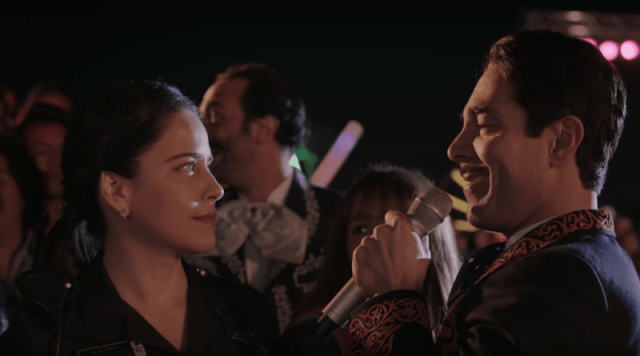 The angels will supervise his tidying up of New Pedro’s life, which won’t be easy. They’ll watch over him (they’re nude, easily the funniest joke in the movie), make sure he doesn’t go and tell anyone or otherwise give away that he’s the real Pedro Infante, reincarnated.

The fish-out-of-water possibilities here are promising, the sexist old school mariachi trying to fit in without realizing what cell phones are, and that feminism has put women in uniform and changed Mexico and the world in ways that render rakes like him obsolete.

That’s not the movie José Pepe Bojórquez (“Hidden Moon”) chose to make. The culture clash/battle of the sexes/generational differences stuff is mentioned, but never ever grappled with. Somebody might mention how out of date quinceanera “coming out/coming of age” parties are, but New Pedro’s niece Milagros (Elaine Haro) wants a lavish one, and that’s that. Pedro insists on taking control of Raquel’s police motorcycle, old fashioned Latin macho at its worst. She acquiesces.

Pedro, given the bare minimum of charm and charisma by Chaparro (seen in “Compadres” and as a bit player in the Eugenio Derbez comedies “How to be a Latin Lover” and “Overboard” in the U.S.), is trapped in a seriously old-fashioned and scattered comedy that makes much of Infanté’s reputation, but shows little evidence of the man who tells his guardian angels “Women are what kept me strong. They were my VITAMINS!”

His transition should be one of shocking abruptness, a “Eureka” moment when he sees the light thanks to meeting his granddaughter (Yare Santana) for the first time, a young woman (great-granddaughter age, just saying) with a seriously-jaded view of a “great” man she never met.

Instead, Chaparro plays this guy as catnip to the ladies, eager to brush them off, repent, reform and patch up New Pedro’s life. That’s going to be tough because New Pedro was cheating with the cousin (Stephanie Cayo) of wife Raquel, Raquel mortgaged their house to the hilt to pay for his medical bills and she cannot forget or forgive his faithless womanizing.

Pedro is chased by thugs in the employ of the mayor, sings in assorted Infanté impersonator competitions, on the street and in the restaurant where granddaughter Jenny works, and winds up in the ring — fighting (literally) to raise money to bail out Raquel’s mortgage woes. Restaurant kitchen pals, Pedro’s mariachi bandmates, Raquel’s family and policewoman colleagues all figure in the story.

None make much of an impression.

Unfunny asides about cell phones, automatic dishwashers and the hyper-sexualized twerk-crazed dancing on music shows on TV pop up.

Yeah, it’s all over the place. A promising, legendary subject wrecked by a cluttered script that tries many dated things, most of which don’t play as particularly amusing.

The silky, disembodied voice of Infante does the singing for Chaparro, understandable, but a little off-putting.

It’s more frustrating than funny, a movie titled “Como Caído del Cielo (As Fallen from the Clouds)” that plays as fallen but never quite getting up from that fall.