Movie Review: “Cats” can’t be as bad as all that, can it?

Heavens, the venom hurled at “Cats,” one of the first big “tourist attraction” musicals, finally brought to the big screen and with a star-studded cast, no less.

Long-planned, long-thought unfilmable, a hodgepodge of songs and feline choreography and feelings attached to the flimsiest plot one could piece together from the poems of T.S. Eliot, it’s not going to be to every taste.

Early reviews have taken on a blood-in-the-water feeding frenzy from the reviewing community. Is it really the “worst film of the year,” as a few have intimated?

A mix of singers ranging from very good to game but not polished, to indifferent and thin, with the great Jennifer Hudson and the not-in-her-class Taylor Swift among them, digitally-augmented fur and tails which render some good choreography choppy and jerky and a “plot” that’s been problematic from the start and there you have it. As the trite cliche goes, “It is what it is.”

But approach it on its own terms, as a period piece with a twinkly electronic-flavored ’80s score. Recognize that it is spectacle song and dance and emotion and cat-fancying, and eventually you’ll get what director Tom Hooper (“The King’s Speech,” “The Danish Girl”) was shooting for.

There’s a chance you could still recoil from it, the garishness of it all. But if you aren’t moved by “Memory,” the play’s show-stopper, even if it seems the Oscar-winning Hudson is about to overwhelm it at times, that’s on you.

Perhaps you’re too far away from the old age and loneliness this epic balladdic lament is about. You’ve never tried to comfort an ancient pet in your arms, assuring them that they’re not dying alone.

Ballerina Francesca Hayward is Victoria, a young cat dumped in an alley in a neon-lit soundstage and digital backdrops version of 1920s London.

She is taken in by the gang, the Jellicle cats of Eliot’s poems. She dances with and sings with them as they tell their stories in song.

One deserving cat, nearing “The End,” is singled out every year by Old Deuteronomy (Judi Dench) as being worthy of selection to go to the “Heavyside Layer” to be reborn and earn another of those “nine lives” cats are supposed to have.

Mr. Mistoffelees (Laurie Davidson) is “a magical cat,” a magician. Bustopher Jones (James Corden) is a fat cat, “puss in spats,” a bit of a swell. Jennyanydots (Rebel Wilson) is confined to one tiny corner of her house, the kitchen, where she plays with the mice, trains the cockroaches as a marching chorus line (chomping down on one, every so often). Skimbleshanks (Steven McRae) is “The Railway Cat,” a terrific tap dancer.

There’s Gus the Theatre Cat (Ian McKellen), ancient enough to sing that he’s “not the cat that I was in my time.” McKellen gives this doddering old hoofer a twinkle and is one of the stand-outs in this cast.

There’s funky showoff Rum Tum Tugger (Jason Derulo), and many others — all of whom are spied on by the streetwise McAvity, given a delicious menace by Idris Elba. He’s so cunning, he plays on fixing the “selection” for himself, so cruel he’s willing to do awful things to the other cats being considered to ensure his own survival.

And he’s so important that he has his own sultry siren as opening act, Bombalurina, vamped up by Taylor Swift, who puts her song over despite not having what we’d call a “musical theater voice.”

Neither do Dench, McKellen or the ostensible lead, Hayward. If you’re going to this for the music, you might feel let down by a few of the singers.

And if you’re most familiar with one of the many plaintive, sensitive covers of “Memory” that have streaked through the pop culture firmament over the decades — Streisand’s lovely one comes to mind — you might not warm to Hudson’s crushing embrace of “Touch me, It’s so easy to leave me, All alone with my memory, Of my days in the sun.”

I went with it. And for its sometimes choppy dance numbers and its various dead spots — it’s really too much, too diffuse, too loopy to be the play that turned generations of kids into musical theater fans — I went with the film, too. 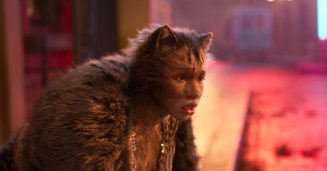 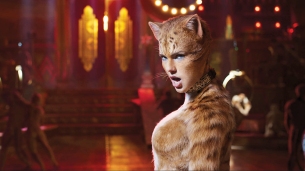 A project this challenging, this ambitious and this extraordinary, for all its faults, is foolish to dismiss. God knows we have enough mass market “product” built on a guaranteed “Star Wars,” Marvel or “Insidious Universe” fanbase.

If it’s not for everybody (I think fans of the play will like it), that’s no crime either.

I appreciate the effort, got in sync (eventually) with what Hooper was trying to do and found myself quite moved, once or twice — which is twice more than “The Rise of Skywalker” managed.

MPAA Rating: PG for some rude and suggestive humor

Credits: Directed by Tom Hooper, script by Tom Hooper and Lee Hall, based on the musical by Andrew Lloyd Webber which was based on T.S. Elliot’s “Old Possum’s Book of Practical Cats.” A Universal release.