Movie Review: “Bombshell” takes us behind the scenes for Fox’s “War on Women”

Posted on December 18, 2019 by rogerinorlando 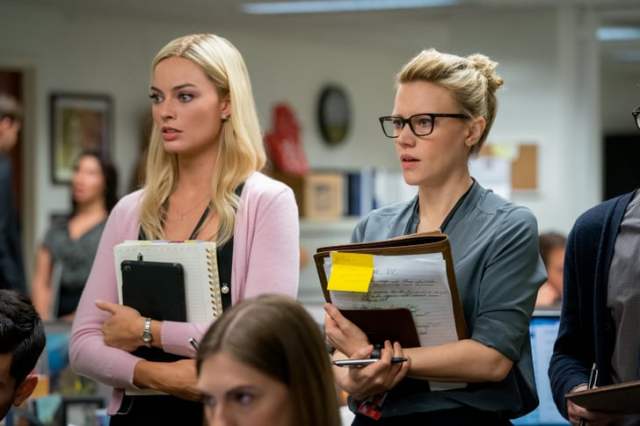 A telling moment in “Bombshell,” the film account of the Fox News sexual harassment meltdown that took out founder Roger Ailes, star Bill O’Reilly and others, has rising star Megyn Kelly in the car, driving home through a toll booth where the sign “STAY IN YOUR LANE” is illuminated.

It’s that kind of movie — on-the-nose, preachy, and when it’s being funny, not that subtle. Yes, director Jay Roach did “Trumbo.” But it’s moments like this — and others just as obvious — that remind you he’s also the pound-a-thumbtack-with-a-sledgehammer fellow behind the “Fockers” and “Austin Powers” comedies.

But by that moment, “Bombshell” and its peerless cast has already lured you in to the chilling “Mad Men” era sexual culture of Fox News, a land of ethical and in the case of too many of its female employees, limitless moral compromises, its airwaves filled with “outrage machine” older white anchors, and much younger women, many of whom fit the descriptor that is the film’s title.

“Bombshell” tells the story of ex-beauty queen Gretchen Carlson (Nicole Kidman), older and as presented here, growing more independent and less deferential to men with every broadcast, a woman fired for one too many “break from the party line” moments such as advocating for the return of the assault weapons ban. She fought back with the lawsuit that would unmask paranoid “casting couch” king Ailes (John Lithgow).

Her suit is pitched as a moment of 2016 election year truth for Fox star Kelly (Charlize Theron), a smart and canny anchor who took fire from “The Crazies” (how everybody in Fox describes their far right audience) when she stopped declaring Jesus and Santa Claus were white and started hitting MAGA candidate Donald Trump for his lifelong misogyny. In the film, Kelly is reluctant to speak up in support of Carlson, but eventually moved to act, even as she lets us pick up on her being cunning enough to see how this could be of personal benefit.

And then there’s naive, idealistic conservative Florida Christian Kayla (Margot Robbie), a fictional young producer with Carlson’s show, then O’Reilly’s. She’s a True Believer, “an influencer in the Jesus space” speaking up for “Evangelical Millennials ki it” who becomes EveryWoman whose experiences with the Weinstein-esque Ailes represent decades of his predations.

All three narrate their chunks of the story, taking us through Carlson’s seeing the writing on the wall for her and plotting her revenge, and Kelly’s eye-opening realization that these rabid right wingers she’s been throwing red meat to will hurt her or her family (Mark Duplass is well-cast as her husband), fanatics egged-on by then-candidate Donald Trump.

Kayla? She has a fellow producer, Jess, played by “Saturday Night Live’s” Kate McKinnon, to guide her through the minefield of this toxic, egomaniac-packed newsroom. Jess is gay and knows how to keep her head down, in addition to knowing to never ever pitch O’Reilly an idea Rush Limbaugh has had first.

A flood of clips from actual “Fox & Friends” moments (real and re-created) and others making sexist remarks on air, and in the halls and offices capture a workplace where women either silently endured, or elbowed back to little effect.

We see the hiring practices that got all these “legs” put behind clear-glass desks — “Television is a VISUAL medium!” is the Ailes mantra. But legions of men at all levels of the organization felt free to comment, sometimes luridly, on women’s appearances, and proposition them if they were in positions powerful enough to demand compliance.

Roach, screenwriter Charles Randolph and a dazzling cast which keeps adding dazzling new members, first scene to last, capture the chilly paranoia in that “news” room, some women bridling at their treatment and happy that Carlson, at least (she is all alone for the longest time) is standing to the treatment.

Other women are handing out “Team Roger” t-shirts as the scandal explodes into America’s legitimate media and the Murdoch owners of Fox launch an investigation into Ailes and the culture he created.

When even Kelly’s staff is so afraid, on a daily basis, of her being labeled that they bark “She is NOT a feminist,” repeatedly, you get it. And you understand why Fox News America would never vote for a woman who didn’t look like these bombshells, or a reasonable facsimile from Alaska.

Aside from the men, Foxists Greta Van Susteren (Anne Ramsay) and Jeanine Pirro (Alanna Ubach) come off the worst, strident Ailes defenders who claimed to have never experienced his come-ons.

Connie Britton plays the Camille Cosby of this horror show, Mrs. Ailes, a virulent right-winger who feigns ignorance at what her husband was accused of.

Whatever else Roach managed here, pitching “Bombshell” as a cause, something “name” actresses wanted to be seen in out of support, really paid off.

A third Oscar winner (after Kidman and Theron) shows up as Ailes’ lawyer, with Allison Janney playing Susan Estrich.

And none of this would work without impressive villains. Lithgow’s prosthetically-altered Ailes is, if anything, more deranged than Russell Crowe’s portrayal of Ailes last summer in “The Loudest Voice.” Hobbled, raging like Dr. Strangelove as he waddles about on his walker, paranoid and cruel, he orders his pretty young things to “Stand up and give me a twirl,” show more and more leg, and demands “loyalty” above all.

And media oligarch Rupert Murdoch, who has sewn crippling dissent via media smears, dirty tricks and lies in his native Australia, Britain and the U.S., is given a cold, calculating turn by Malcolm McDowell.

The laughs may be a little too easy — dressing ANYbody up as Geraldo Rivera is a cheap guffaw — and the messaging too pointed and lopsided to appeal to every viewer.

But I loved how every time we think Kelly has a conscience, that perhaps her racism or conservative fanaticism is just “an act,” the script and Theron give us hints that maybe she doesn’t. Kidman’s Carlson is similarly undercut, not just for her motives, but for standing up FOR Fox at its most indefensible, as much as the movie likes to present her as a moderating voice AT Fox.

“Bombshell” won’t win converts. But if the only-channel-we-watch crowd does show up, they should be chastened and chilled. Yes, this happened. And boy, when women decide to gang up on bullies, rapists and harassers, watch out.

MPAA Rating: R for sexual material and language throughout

1 Response to Movie Review: “Bombshell” takes us behind the scenes for Fox’s “War on Women”