There’s warmth and a delightfully prickly edge every time James Caan and Tom Hollander square off in the Holy Land in the dramedy “Holy Lands.”

Harry (Caan) is a salty New York Jew who has relocated to Israel to raise pigs. Moshe (Hollander) is an Orthodox rabbi, teacher and Harry’s neighbor, and deeply offended by this.

They have exchanged unpleasant letters — “degenerate” to self-righteous religious crank. Moshe tried to yell at Harry in person, but can’t even let himself ring the man’s doorbell (He uses his jacketed elbow), trips on his property and harangues his wife, “Scrub scrub…(We’re) never going to get this pig off me.”

And then they meet.

Moshe — “Why don’t you cleanse yourself and stop humiliating us all with your DISGUSTING animals?”

Harry — “Cleanse MYself? Get rid of the stupid beard and the (bleeping) hat and the coat when it’s 98 degrees in the shade!”

Harry could have “played golf like everybody else” in his retirement, as his son (Jonathan Rhys-Myers) writes. But no.

And writer-director Amanda Sthers could have kept the focus on this conflict, with pigs and people and religion in conflict with the religious and the secular.

Harry runs the only pig farm in Israel, for obvious reasons, and “Israeli Jews are gorging themselves on bacon, and I am the man providing it!”

But Sthers gets lost in the playwright-son’s story. He’s turning the letters to and from his father into plays. Sthers gives us a heavy dose of the daughter’s dilemma, refusing to grow up. And she throws in melodrama with the ex-wife.

None of which are interesting enough to leave Israel and Harry and Moshe for. Harry’s also run afoul of a local Christian sect, and as he’s had to hand-feed a piglet who becomes a pet, the pig becomes a magnet for Moshe’s critter-loving youngest kid.

He’s come here to stick a finger in the eye of the Palestinian conflict, where as he points out to Moshe, Israeli Jews were putting bags of blood on buses to keep Islamic suicide bombers from blowing them up (All of the victims would be “unclean.”).

And maybe his move was a symbolic rending of his garments in the ancient tradition, estranged from his gay playwright son, almost estranged from his ex-wife (Rosanna Arquette) and powerless to fix whatever’s gone wrong with his 34 year-old photographer/daughter (Efrat Dor) who never got over a trauma in her past, and never matured into a life of work and marriage.

“Holy Lands” works when Harry and Moshe are bickering, and doesn’t quite work anytime they’re not on the screen. From daughter Annabelle’s debate over Israeli “wall” politics with a female soldier to her chance romantic encounter with a stranger in an air raid shelter to son David’s vague struggles to Monica the ex-wife’s trials, they’re all peripheral characters in scenes that are inferior entertainment to what Caan and Hollander deliver.

And then there’s the offensive content. The country’s Muslim population is discussed but never seen. Moshe gets to give a succinct defense for not eating pork, but later the rabbi has the temerity to claim “The Palestinians are a proud people, but they seek to recover something that is long dead —  the past.”

Don’t get me started on how the film treats the Christian sect, whose humorless priest gets his back up after refusing a drink, which Harry says lets him “defy the (drunken priest) stereotype.”

“You amuse yourself by mocking your religion?”

Yeah, Moshe cracking “Stay away from the church. They’re try to crucify you…or CONVERT you!” is funny.

But making the Christians and their assertion that “God…has asked you to leave” the fanatics, doesn’t seem cricket. In an Apartheid state riven by conflict and age-old hatred, terrorism and reprisals it is the Christians who are the unreasonable and violent ones? 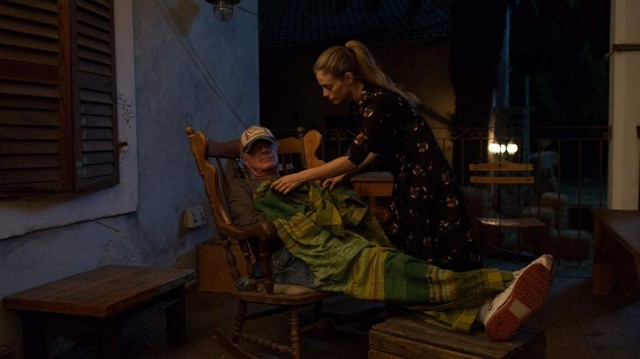 We’ve never had much of a chance to see Caan in an overtly Jewish role (he is Jewish), so give me more “COME to Shabbat dinner!” And “Shabbat THIS!”

Let the feuding neighbors bond over reggae, as the rest of the world does (“Many Rivers to Cross”) in a car ride sing-along.

Leave in the ex wife’s “You are the Larry Flynt of the Middle East..a pig pornographer.”

But most of what we see in New York and Brussels (where daughter Annabelle is burning through Daddy’s cash) is wasted screen time.

Credits: Written and directed by Amanda Sthers. A Cinedigm release.