Netflixable? “Berlin, I Love You”

And so the filmed letters to cities and lovers in those cities that began with “Paris, je t’aime,” ambled into “New York, I Love You” and ventured to “Rio, Eu Te Amo” finds its way to Deutschland with — wait for it — “Berlin, I Love You.”

They’re short films sharing a city, a theme and (apparently) a production designer, lovely travelogues that tie together with differing degrees of success.

I’ve never wanted to go to Berlin, but this “pounding heartbeat of a divided muscle” kind of wins one over in a wildly-uneven series of vignettes directed by the likes of actor-turned-director Til Schweiger (he was in “Inglorious Basterds,” none of his directing jobs have made a dent in the U.S.), Massy Tadjedin (“The Jacket”), Peter Chelsom (“Serendipity,” “Hector and the Search for Happiness”) and “Glee!” actress and director Dianna Agron.

Let’s pause for a moment and scan to the bottom of this review. Yeah, a lot of people “directed” bits of this, and even more had hands in scripting it (IMdb lists several, and just gave up after a while).

What they all came up with was a lot of scenic settings romantically “experienced” by mostly Western, mostly American or British and pretty much entirely white actors.

Basically, a lot of very pretty people — and Mickey Rourke — find something resembling love in the once-divided capital city of Germany.

That tortured last century of Berlin history is covered in a brisk, animated montage in the film’s opening credits.

We drop into the connecting story — an Israeli singer/busker Sara (Rafaëlle Cohen) meets and tangles with German mime in angel wings Damiel (Robert Stadlober). Their connection drifts in and out of the narrative as we run into first Jim Sturgess as a lovelorn man who “came to Berlin to die…Seemed like a literary place to drink myself to death.”

He’s just had an unhappy love affair. But his decision to pick up a late model BMW 850 with the vocal GPS “assistant” Vanessa, which ventures from “Where are we going today, Jared?” to intervening in his attempted suicide.

“Take me to the nearest bridge” doesn’t work out. Perky, grumpy French neighbor Charlotte LeBon does.

That piece by Chelsom is feather-light and just the right length. If the rest of the movie had been as pleasant…well.

“Berlin” has been Anglicized and Hollywood-ized for your protection — scenes where a big budget filmmaker (Luke Wilson) is smitten by a park-busking puppetmistress (Agron, who also directed), a post-breakup “Sunday Morning” riverside encounter between a drag queen (Diego Luna) and a liberal minded young man, a feminist “Me Three” laundromat where women bond over bad experiences with men — and take a little revenge.

“Under Our Feet” has Keira Knightly playing a refugee aid worker who takes in a Middle Eastern boy “just for tonight,” much to the disapproval of her visiting Mum (Helen Mirren).

And in the glossiest sequence, Jenna Dewan is swept into a serenely sophisticated cafe society night club evening of dance and Big Band jazz.

Schweiger’s piece of the film is an off-putting bit of melodrama — perils-of-plastic-surgery case Mickey Rourke hitting on a prickly but surprisingly compliant young beauty (Toni Garrn) in a Berlin bar is just…icky.

Others tumble even deeper into melodrama, or run out of things to say (a couple of pieces try to address “the world today” with its anti-immigrant mania) even if they still find parks and Gothic nightclubs aplenty. 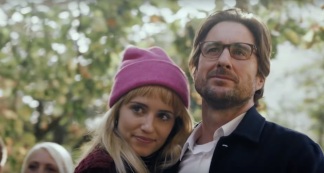 Wildly uneven, as I said earlier. But at least some good character actors got a nice German vacation out of it, and “Berlin, I Love You” is pretty enough to make you plan your own.

Just avoid the bars, brothels and laundromats and you’ll be fine.