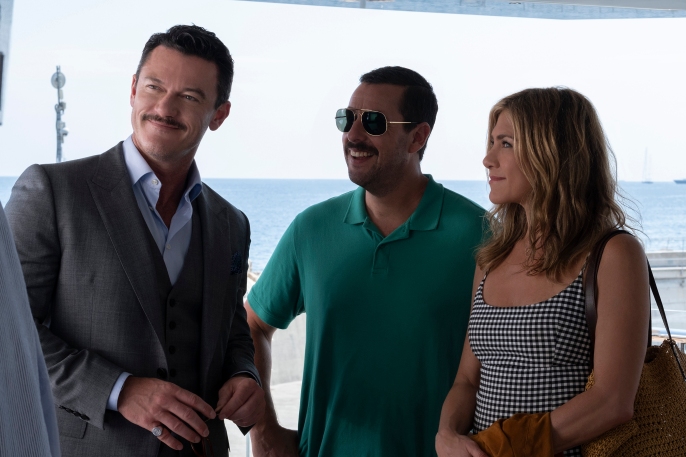 “Murder Mystery” is a comedy as inventive as its name, as witty as Adam Sandler‘s mustache and a darned good use of Netflix’s billions.

Send the Sandman and Jennifer Aniston to Monaco and Italy for a wacky riff on Agatha Christie, “Clue” and every other “The Butler Did It!” in the history of stage, screen and cheap paperbacks.

No, really. Reunite the “Just Go With It” stars — because that really worked out — as  a married couple caught up in one percent intrigues, murder and inheritance issues on the sunny Riviera and the George Clooney (Lake Como) District of Italy.

How bad could it be? I mean, no worse than “Just Go With It,” right?

The geography may be fresh, and Sandler may have to get by without his make-work support group of ageing SNL comics (Colin Quinn, Chris Rock, David Spade and Rob Schneider) and sports hangers-on (Dan Patrick).

But the weaknesses are basically standard-issue Sandler movie faults. Start with how dull the star is and the “common touch” gaucherie he embraces in the most pandering manner possible and throw those “strengths” at a script where the plot is everything.

That’s what murder mysteries are — plot exercises full of false clues (“red herrings”), twists, and “I never guessed He/SHE did it!”

It was a worn out, mockable genre long before Woody Allen’s “Manhattan Murder Mystery”  — with Neil Simon serving up “Murder by Death” way back in the ’70s.

Sandler is Nick Spitz, a New York cop who can’t pass his detective exam, not that he ever tells his wife of 15 years, Audrey (Aniston). He’s a lump and a cheapskate, and a favorite subject of complaints in the beauty shop where Audrey works.

Where’s that European vacation you promised when we got married? OK, that’d be cheaper than admitting he’s not detective material.

The flight over is where she meets the dashing Viscount (Luke Evans) in the first class lounge. That gets them invited to the shipboard wedding of the Viscount’s billionaire uncle (Terence Stamp) to a woman who once was the Viscount’s intended (Shioli Kutsuna).

And it’s on that yacht that rich uncle goes on a rant and is just about to write all the “leeches” on board out of his will. The lights go out, and the Dagger of Quince, a knife given to their ancestors by Marco Parlo, is jabbed into Uncle Walter.

Or was it the American cop who isn’t really a detective and his “silly mystery novel” loving wife?

The others on board and the French Interpol cop (Dany Boon) who arrives to investigate, ALL of them assume it’s the Americans. 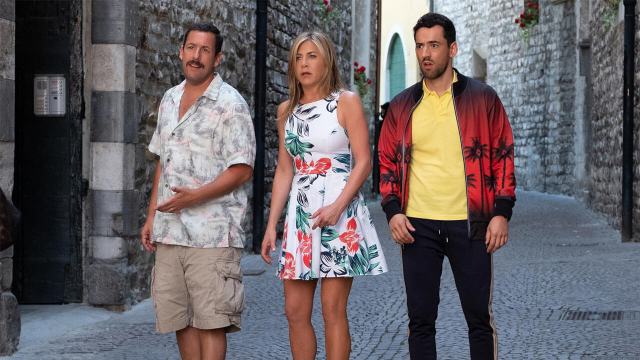 Let’s give the Spitz’s 45 minutes or so — the preliminaries eat up WAY too much of this movie — to solve the case themselves and clear their names.

Aniston spends much of the movie asking people like the Viscount and the Maharajah “How do you get into something like that?”

Sandler trots out his usual collection of lazy crudities, from F-bombs to “boat sex.”

“I just lay here and the boat does the work!”

Their predicaments include getting shot at in various locales.

“What happened in ‘Death in the Library?'”

Adeel Akhtar of “Victoria & Abdul,” “Swimming With Men” and “The Big Sick” gets off the best zinger, vamping up the whole serene stereotype of an Indian maharajah — bowing inscrutably.

“When a brown person bows, WHITE people bow back!”

He loves how that works.

The movie isn’t awful, just a charmless non-starter where the leads can’t find enough funny business in the screenplay from the guy who wrote “Zodiac.” Wait, really?

Everybody does their job, and nothing extra, in a movie that screams for “Give me some business here, some shtick. Make up something!”

Nobody does, not even Sandler, who was never that good at juicing up joke-starved scripts in the first place.

Slack direction just makes “Murder Mystery” groan along when a little pacing, as ALWAYS, would have covered up some of the other shortcomings.

The banter is tepid, the action beats (and car chase) kind of fun and Aniston gives fair value. She must have thought the Clooneys were watching every take.

But Sandman sleepwalks through this one, not that he’s exactly been hamming like his career depended on it in any of these Netflix movies that he makes instead of big screen features.