Documentary Review: The rewards of being “The Quiet One” in The Rolling Stones 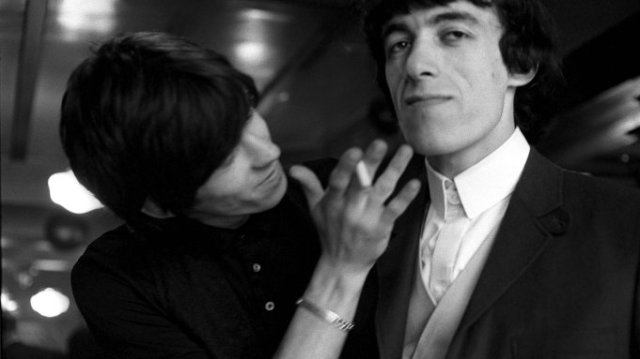 It was a radio interview in the mid-1960s, and The Rolling Stones, in the blur of their first rush of fame were asked, “What was it like the first time you were ‘mobbed?'”

We hear voices murmuring, and Mick Jagger speaks up, “That’s a really good question.” He thinks for a second or two more, and says “I don’t remember!”

“I do!” we hear another voice break in.

“Well, BILL does,” Jagger jokes. Of course “Bill does.” Bill Wyman remembered all, documented everything, kept tickets and tour posters, every article written about The Rolling Stones, every band button they ever issued, filmed home movies, took stills backstage, still has the first DIY bass he ever crafted out of an electric guitar he ruined.

Hell, Bill Wyman kept a cassette tape of the damned radio interview where he says “I do!”

He was the “Stone Face” of the Stones, “The Silent Stone,” the bassist whose goal was “not to get in the way, not really noticed” but whose “tremendous presence” and “air of world weariness” co-anchored the esteemed rhythm section of the world’s greatest rock’n roll band during its glory days.

He was the one who quit on a high note, at the end of a gloriously strung-along “comeback” tour from 1989-92.

And Wyman — born William George Perks, Jr. — was the archivist.“The Quiet One” is a documentary built on those extensive, one-of-a-kind archives.

For much of the debut feature length documentary of Oliver Murray, we see Wyman from behind or in profile and hear his voice telling the story of his life.

Using still photos, montages of news clippings, newsreel footage and TV news archives, along with the odd cartoon drawing of Bill at signature moments in his life, Wyman and Murray tell the (sanitized for your protection) story of the life of a rock star.

Rock history buffs and Stones completists will treasure Wyman’s memories (he kept cassette diaries even in their early years) and memorabilia from his childhood — he was the oldest member of the band whose childhood was the London Blitz of World War II.

Invited into the Stones by the drummer of his first band, The Cliftons, he outlasted that drummer and went on to build a career that made him rich and famous, something only his doting, died-too-soon grandmother predicted all those years before, when he was just a bricklayer’s son from the rougher precincts of London.

“The Quiet One” charts the history of The Stones, their various tours, the “sadness” that accompanied watching Stones founder Brian Jones’ drug-fueled decline and death, the fear that came from his one serious drug experience where “the emptiness underneath me” freaked him out, and “then came Altamont.”

Wyman doesn’t go deep into this tragedy, Jones’ death, the band’s hard pragmatism at relegating keyboardist, road manager and “sixth Stone” Ian Stewart to a permanent in-the-shadows role, or Wyman’s later marriage to a woman 33 years his junior whom he married and split from in less than a year, a woman he’d “dated” as a 13 year-old girl.

On the infamous Altamont concert, “The violence just never stopped” at this event, which he sort of shrugs off with a “sometimes, you just lose control of things.”

The marriage, one of three, earns a simple “I don’t know what I could have been thinking.”

Clapton, Bono and Glyn John’s sing the man’s praises as a musician, and a presence. Stylistically, we hear but don’t see those interviewed for the film, and only see Bill in the flesh in the late going.

The fun thing about the Third Act Wyman is seeing how starstruck he himself could get. This started to manifest itself when the band became French tax exiles in the early ’70s. Whatever one read about Keith and Mick in the headlines, Wyman was widening his horizons, meeting the poet Andre Verdet, and through him all the luminaries of French art and culture, including the artist Marc Chagall.

That’s the same time Wyman met and befriended American expat writer James Baldwin. And through Baldwin, Wyman came to be a late-blooming fan of the great Ray Charles.

He backed Muddy Waters, Buddy Guy and Junior Wells at Montreaux, Howlin’ Wolf shortly after that (in ’74).

He wrote, sang and joked his way through a music video for his sole solo hit pop single, “Si si, Je Suis un Rock Star” in the ’80s.

Then, the feuding Stones got together for those world-dominating tours in ’89, which seemed a peak moment to Bill W.

It’s a fascinating film, jaw-dropping in its breath and potential depth, even if it skims the surface of what the grinding, isolating life that level of wealth and fame brings with it.

“The Quiet One” leaves a lot out, Wyman’s other passions (he’s a published author on the subject of metal detector treasure hunting, etc.), for instance.

But when the Great Book and film are finally created about the World’s Greatest Rock’n Roll Band, it’s comforting to know that it’ll be conjured, like this film, out of the vast, preserved and indexed archives kept by the guy most of us didn’t notice, “The Silent Stone,” aka “The Quiet One.”

Credits Written and directed by Oliver Murray.  An IFC release.