Movie Review: Octavia unfurls her frightening side in “Ma” 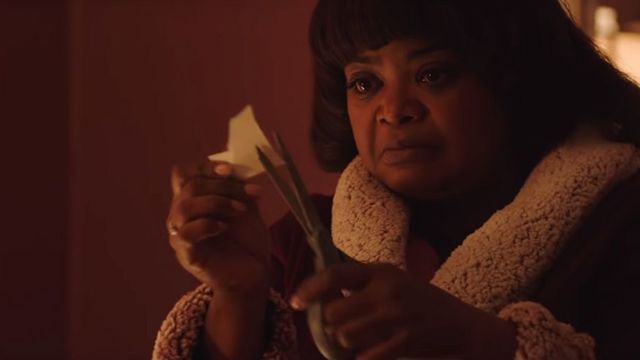 Oscar winner Octavia Spencer brings it, and how, in “Ma,” a real world horror tale blessed with a top-drawer cast and a grimly satisfying third act.

But you know that if you’ve seen the trailers. Two Academy Award winners, plus Juliette Lewis, Luke Evans and Missi Pyle, an up-and-coming young actor contingent headed by Diana Silvers of “Booksmart,” all fodder for the vengeance of a woman who never got over her high school disappointments.

It’s a screenplay that gives away its mystery fully and all too easily, and as directed it just sort of ambles along — flashbacks over-explaining the motivation of the villain, her history. The fact that we’ve seen the money shots in those trailers makes “Ma” play longer than its 100 minute running time.

It’s just that there’s much to recommend it outside of those failings, sharp observations about the trap of small town life and the persona you take on in your teens than you never escape, the casual cruelty of teenagers that can (in the movies, anyway) leave scars that linger forever, the craving for acceptance that once denied, you never outgrow.

Maggie (Silvers)  and her divorced mother (Lewis) move back to mom’s old hometown in Ohio. Mom’s too old to be wearing cocktail waitress fishnets, but here she is, starting over at the casino that popped-up near where she grew up.

Maggie? She’s cute enough to make friends easily.  Haley (McKaley Miller) may be a born mean girl, but she and her crew (Dante Brown, Gianni Paolo, Corey Fogelmanis) invite her in. Parties, cruising around town in cute-guy Andy’s van, drinking binges and bonfires at “The Rockpile,” an abandoned industrial site outside of town, are sure to follow.

If they can only score some booze! It’s just that every customer they approach to make the purchase for them at the local liquor store blows them off. Even the lady in nurse’s scrubs (Spencer). But Sue Ann lets us see the wheels turning, the thinking that moves her from “You want to spend the night in jail?” to “I used to do the SAME thing when I was your age.”

She fills their shopping list, but she also talks them into a “safe” place to party. It’s her basement, but it can be their hangout. Just a few rules. Surrender your car keys, for starters. She wants to ensure no drunk get behind the wheel, she says.

“Don’t take the Lord’s name in vain. Don’t spit on my floors,” and above all, “DON’T go upstairs.”

Thus is the bond made between a bunch of tipsy teenagers and the veterinary nurse they call “Ma.” It starts out looking like charity and quickly turns to something darker and more desperate.

Ma is all “Now you know where the PARTY is!” and flirting with Maggie and the guy who has Maggie’s interest, Andy (Fogelmanis), telling them “I don’t drink. You REALLY don’t want to know,” and social media blasting them with the only question that matters, if they’re “all down to clown?” 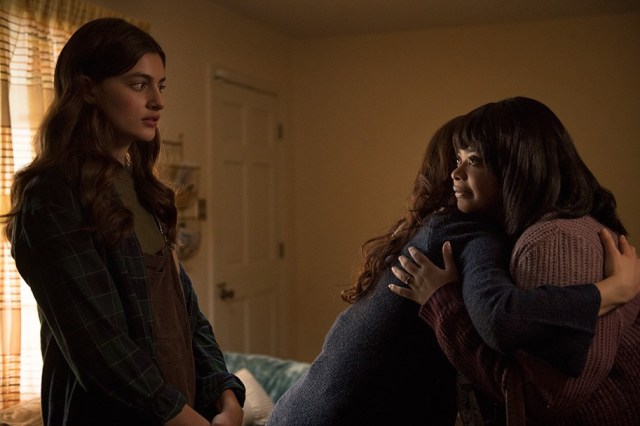 The signs that Ma isn’t what she seems are everywhere. The audience gets flashbacks, sees Sue Ann swiping phones to grab numbers, social media stalking and skulking around their homes and school.

The kids? They’re subjected to a temper that flashes in view and a practical joke that involves a gun — right at the outset. And still they’re slow to catch on. That’s liquor for you.

But all that stuff, the flashbacks, the relationship dynamic that hasn’t changed since the ’80s, explains too much. It gives away the whole game.

Ma’s little mood swings may tease us into thinking “Here we go,” but we don’t. It takes an hour of stripping away mystery and “motivating” everybody for this picture to truly get on its feet.

Better to leave Ma’s tricks and her backstory for the third act? I think so.

Spencer makes “Ma” malevolent and motivated, but there’s little shock value to the character’s plunge into “unhinged.” The adult stories are interesting, if on the nose, trite and true. And that strips screen time from the kids, who are just pawns in the Big Game and are so underdeveloped that rooting for them takes effort.

The finale may fool you into thinking all that came before was necessary, even if you’ve forgotten it as soon as you toss your popcorn box. But the preliminaries slow “Ma” down and soften its blows for far too long to make that final punch the knockout this might have been.

MPAA Rating: R for violent/disturbing material, language throughout, sexual content, and for teen drug and alcohol use