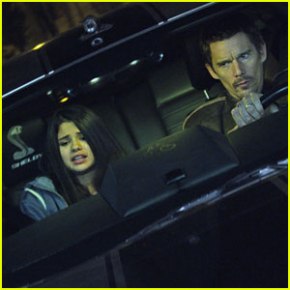 And thus does a summer that started with a silly car chase picture end with a sillier one.
“Getaway” has some of the elements of a good gear grinder — a B-movie where a car takes a pivotal role in the cast.
It’s got Ethan Hawke, doing enough of his own driving to pass muster with the likes of Ryan Gosling (“Drive”) Dax Shepard (“Hit and Run”) or Paul Walker (“Fast & Furious”).
It’s got a cool car — a Shelby Super Snake version of the Ford Mustang.
It has an unusual city setting — Sofia, Bulgaria.
And then Selena Gomez shows up as the mouthy, tech savvy sidekick dragged along for a long, Christmas season chase through the not-quite-generic (tramlines, train tracks) mean streets of Sofia.
That’s where the silly kicks in. The improbable set-up — disgraced racing driver’s Brent Manga’s Bulgarian wife (Rebecca Budig) has been kidnapped, he gets a call and is told to steal a particular armored, camera-packed Mustang which he will drive on a series of “tasks.”
The villain, whose chin stubble and martini slurping lips are all we see, if played by Jon Voight mit a German accent.
“You’re runnink out off time — tic toc, tic toc, he purrs, and we’re off.
Having a car covered with cameras raises the variety of shots and sometimes amps up the pulse-pounding nature of the chases, choreographed by Charlie Picerni. Until you notice that door mirrors that popped off in the last chase magically return to the magical Mustang in the next scene.
“I can’t believe that worked,” Magna confesses after one escape. Too often, neither can we, despite the non-digital/real-cars-having-real-crashes nature of the beast.
A guy having his wife kidnapped and threatened with death should be a lot more worked up and manic than Hawke plays this fellow. And a young woman snatched for a ride-along you would think would be freaking out a bit at this or that hair-raising chase, the streets filling with wrecked Bulgarian cop cars, the machine-gunning motorcyclists and what not. The leads don’t turn up the requisite adrenalin-jacked pitch of their voices or the acting.
Director Courtney Solomon (“An American Haunting”) is plainly out of his depth, and when the always reliable Hawke plays a character in the wrong key, that points back to a director who doesn’t have the stature or standing to suggest the proper reactions to this scenario.
Maybe they all took a gander at that random, ridiculous scenario and hoped that the car would be cool enough to bail them out. It isn’t.

(Let’s sum up the summer movies with “Summer Oscars”)