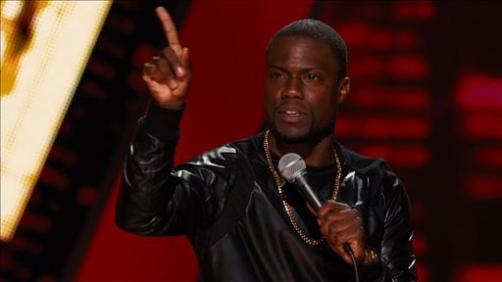 In the timeline of the standard stand-up comic’s career, Kevin Hart has surged past “young, angry and hungry,” seems to be avoiding Dave Chappelle/Andy Kaufman burnout and is settling just shy of fat, happy and car collecting (Seinfeld, Leno, Chris Tucker).
The little man is so self-satisfied you could title his latest concert film “Ego Trippin.'” “Kevin Hart: Let Me Explain” is a short film that captures a shorter set at New York’s Madison Square Garden” and pads it with a long, dead prologue (scripted) of Kevin busting up a party to go “explain” himself at the venue and with closing credits footage of Hart asking people in Oslo, Stockholm and London “Do you know who Kevin Hart is?”
In between his thank-yous to his audience for “selling out” another show, his entourage talking about the “global brand” the one-time star of “Soul Plane” has become — he has half a dozen films in the can, including a sequel to “Think Like a Man” –Hart launches into energetic/frenetic monologues about relationships, divorce, parenting, his need to lie and the various “crazy” women he’s lied to.
“Don’t judge,” he pleads. “Let me EXPLAIN.”
So he does.
“I’m small,” he says, of why he has bodyguards. “I get scared fast!”
He can’t just apologize for being late. Hart has to make up long, elaborate stories about babies running down the Interstate after a half deer/half zebra (“A DEER-bra!”). That the baby turns out to have “Benjamin Button disease” is a clever stroke, one of not that many.
He’s entirely too reliant on broad inflections of “The Paula Deen Word” for laughs, but when you’re not Paula Deen, you can get away with that.
Hart, who turns 33 as this film opens, is a better performer than writer. No smart comic starts his set with “I’m happy, people.” We like our funnymen and women angry and dissatisfied. When you’re riding in a Chevy Suburban convoy (he’s working to feed an entourage, apparently) to two sold-out shows in New York’s signature venue, it’s hard to pretend that’s the case.
He may protest, mid-rant, “You’re laughing, I’m DEAD serious,” but we know he’s not. Not when he’s doing his high-pitched squeal  about some psychotic girlfriend hiding in the trunk of his car, or a son who actually thinks he’s Spider-Man and takes the kindergarten beat-downs that come with not having really web-slinging powers.
OK, maybe the last one is true. And very funny.
But in “Let Me Explain,” you’re never NOT aware that you’re watching a gifted, rubber-faced/rubber voiced performer (his “Laugh at My Pain” concert film was a surprising hit in 2011) work too hard to make inferior material go over.