Movie Review: One “Hangover” too many 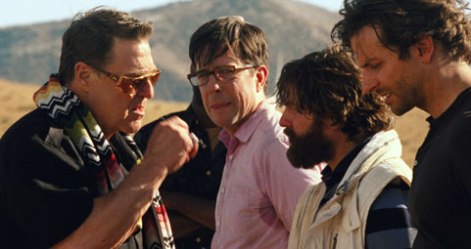 Slow, sentimental and somewhat sedated, the third “Hangover” movie isn’t so much exhausted of outrageous “Oh not they DIDN’T” ideas as spent of energy. And they knew it, too. The only raunchy moment is stuffed into the closing credits, an “Oh no, we FORGOT to do that” afterthought.
They know they’re done. They just want to make sure we know.
“The Hangover Part III” becomes a fairly conventional caper comedy with the capers driven by the still-cackling, far-less-manic Mr. Chow, played right to the edge of caricature by the irrepressible Ken Jeong.
It begins with the Alan buying and accidentally decapitating a (digital) giraffe, driving his doting dad (Jeffrey Tambor) to a heart attack. And that’s just the first death.
Ditzy Alan (Zach Galifianakis) needs an intervention, and that’s when the “Wolf Pack” (Bradley Cooper, Ed Helms and Justin Bartha) are commissioned to deliver him to a rehab facility in Arizona. On the way, they’re car-jacked by a mobster (John Goodman) who takes hapless Doug (Bartha, who’s had the “missing” role in all three films, poor fellow) hostage. The Wolf Pack has to track down the thieving Chow, who has escaped from a Thai prison.
“You introduced a virus into my life, Mr. Chow,” the mob boss bellows. Go fetch him.
The boys promise to “Take him out.” (“Who SAYS that?”) to save Doug. That leads us to Tijuana (“Tijuana’s the BOMB!”) and eventually back to where all this started — Las Vegas.
There’s only one funny cameo, and  funny lines are rare and random this time — references to past escapades (“Did you get tested?”) and Mr. Chow’s pecadilloes (“Gimme some sugar.”).
People and animals die — “I’m sorry, I didn’t know you worked for PETA!”
Even the racist zingers feel like pulled punches.
“We’re looking for an Asian guy. He’s short.”
“They’re ALL short.”
As is the movie, though it plays considerably longer than the first two. As “Hangovers” go, “Part III” isn’t challenging or unpleasant, just instantly forgettable. It won’t take much to sleep this one off.

1 Response to Movie Review: One “Hangover” too many