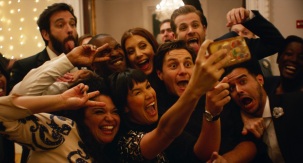 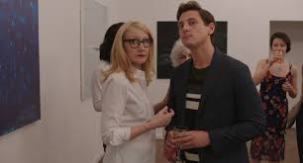 “Almost Love” is one of those soapy romances set in that “fantasy” New York where broke people and the affluent mingle, and the broke, young and hip can somehow afford to live there at all.

It almost works. The characters make us laugh, here and there. And they almost make us invest in them.

The variation on a theme here is that the central romance is that of a gay couple, with the usual selection of flippant, frustrated folks orbiting around it.

And if incidents, characters and couplings in it have a whiff of “sitcom” about them, that might be due to “Friends” and “Seinfeld” burning into the writer-director Mike Doyle’s brain, even if he isn’t aware of it.

Scott Evans and Augustus Prew are Adam and Marklin, the couple at the center of this universe. Marklin is a successful fashion/lifestyle “influencer” blogger, running “The Detailist” and its daily dose of product placement selfies. Adam is a successful painter — or rather successful at being the ghost painter for one of those mass-production pop artists (think Thomas Kincade, only contemporary).

They’re at the stage of the relationship where they’re at a crossroads — marry (they’re against it), or maybe accept that they’re not destined for that. One of the attempted serious threads in the story is suggesting how gay men are different from other couples, in that male “compartmentalization” and “just move on” way.

Cammy (Michelle Buteau of “Always be My Maybe” and “Work It”) is having a “thing” with Henry (Colin Donnell), a bearded, brooding sort who finally admits to her his big, scary secret.

But but “you have such nice SHOES!”

Haley (Zoe Chao of “Downhill” and “Always be My Maybe”) is her always-supportive, always-apologizing tutor pal. Sure, Cammy is sleeping with “the homeless.” But “What white guy is homeless…at 36? On TINDER?”

And besides, Haley says, she’s tutoring a teen who is crushing on her so hard she’s about to get into a “full Pamela Smart” thing (Cammy’s words) with him. Yeah, Haley admits her big faults just to make her shame-spiraling friends feel better.

At least Elizabeth (Kate Walsh) and Damon (Chaz Lamar Shepherd) have been happily married 15 years. Except for the whole disagreement over children thing, they’re perfect.

The friends, who met working together at CB2 years before, are close in age and experiencing slightly different versions of the premature midlife crisis — getting “serious” about life in their mid-30s.

Not that they don’t still get together for dinners out, or meet at the bar for “slap shots,” which is pretty juvenile.

Each comes to a crossroads — after a fashion — and figures out which way to go, or how to carry on after hitting a dead end.

It’s all pretty bland stuff, most pointedly in the person of our main couple. Evans (TV’s “Grace and Frankie”) and Prew (TV’s “The Morning Show”) aren’t terribly interesting together, don’t set off many sparks and never make the relationship feel like much more than an arrangement. It’s commendable, building the rom-com around such characters, men comfortable with who they are in a world where they can be themselves, and be all they can be. But they’re boring.

The financial imbalances in several of the relationships in the film are mentioned but not really explored.  See “Friends With Money,” or for that matter “Friends,” to get a better handle on that.

A deeper dive into things that test a gay male relationship is glossed through, the “big fight” isn’t, the big reckoning with the fraud (Patricia Clarkson) that Adam paints for or big “influencer” torching never comes.

None of it ever truly comes together in a way that makes “Almost Love” almost a rom-rom that works. “Almost” pretty much covers it.

Credits:  Written and directed by Mike Doyle. A Vertical release on Netflix.