Movie Review: Break out that billfold — “Zombie for Sale” 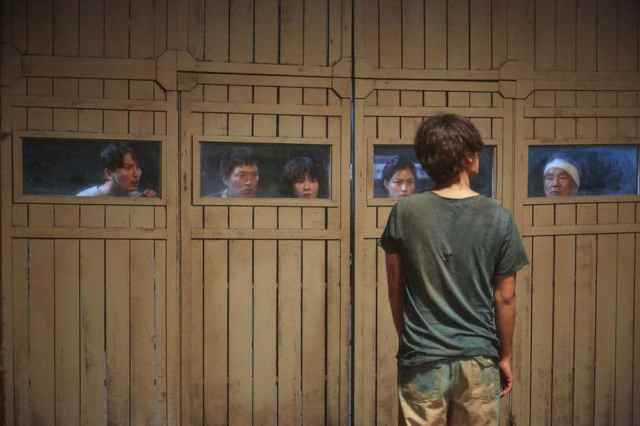 Old Rule — any movie or TV show in the horror genre that uses an electronic harpsichord in its score MUST be a comedy. “The Addams Family” and “The Munsters” forever made it so.

New Rule — All zombie movies should be Korean. None of this Atlanta-area zombie soap “Insomnia-inducing Dead” nonsense. Farce, horror thriller or rom-com, if it’s got “Living Dead,” leave that to the K-Pop K-horror experts.

When it opened in South Korea and parts of Asia, it played under the title “The Odd Family.” Here in the U.S., earning a virtual release July 1, it is “Zombie for Sale.” The only Western “improvement” to this laugh-out-loud-start-to-finish romp is a needed title change.

Sure, it’s a lowbrow genre picture with only the barest hints of “moral parable for our times” about it. But the debut feature of writer-director Lee Min-Jae is a hoot; cleverly conceived, amusingly-executed, comically satisfying.

A family running a failing service station in remote Poonsang has turned to grifting to stay afloat. The towtruck driving son (Jae-yeong Jung) leaves tacks on the road, motorists wreck and “I just happened to be passing by” leads to a tow, over-priced repairs (“Cash only!”) and lasting shame. If only the Park clan wasn’t so…shameless.

But elsewhere in Korea, an insulin replacement drug test has gone terribly wrong. The Parks don’t know this when they run into — literally — their first zombie.

That’s how he gets hit by tow-truck driver Joon-gul, who is pretty squeamish for a mercenary con-artist.

“I’m too much of a pussy to look” is funny in Korean, or in (English) subtitles.

The tone is set and the apocalypse is on its way. Except there are some new wrinkles here. The zombie bites their cranky, card-cheat dad (In-hwan Park) and the infection makes him young and virile. All his card-playing cronies want a bite.

“Line up. Cash only! Nothing’s free!”

Hae-gul develops a crush on this zombie, the one “pet” (she keeps rabbits) she doesn’t seem to be able to kill. She serves him cabbage, coating it with ketchup to simulate “BRAINS!”

Like America’s pandemic deniers, these yokels from the “stupid boonies” of Korea don’t “get” incubation periods and the like, even when their sophisticated city sibling tries to explain them. No good can come from this new “business model.” 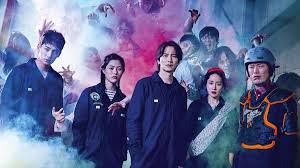 The cast performs the leaps from deadpan and doltish to manic with aplomb. Movies like this invite you to pick a “favorite,” and mine is morose Nam-joo (Ji-won Uhm), the truck-driver’s VERY pregnant wife, who always keeps a frying pan in her hand.

Director Lee doles out giggle-inducing slo-mo and easy-laugh sound effects (from “The Six Million Dollar Man,” for instance) as he serves up the action beats.

This is a “Zombie Aware” universe, where “Ever heard of the ‘Living Dead?’ They’re ZOMBIES” is all the explanation anybody needs for what’s happening.

Here’s something I have NEVER seen before in a screen treatment of characters using the Internet to save them. Min-gul, the “smart” one and guy who “was right all along,” does a web search for “Zombies, what they’re doing and what can be done.”

The web page gives him search results, BENEATH a pop up ad for ties. Yes, even in the Zombie Apocalypse, it’s comforting to know that the web is still tracking our search history and trying to sell us crap.

It isn’t long before a “Zombie Survival Guide” (book) is whipped out.

The energy flags in the middle acts, the logic and “rules” seem fluid (the movie breaks them, at will). But as “Zombie for Sale” manages a wickedly funny sprint to the finish, one thinks of “Train to Pusan” and its upcoming sequel and one remembers that one “new rule” that matters.

No pop culture gives “The Living Dead” their due like Korea.

This site uses Akismet to reduce spam. Learn how your comment data is processed.