Netflixable? There’s no to-the-death feud like a French one, “Earth and Blood” 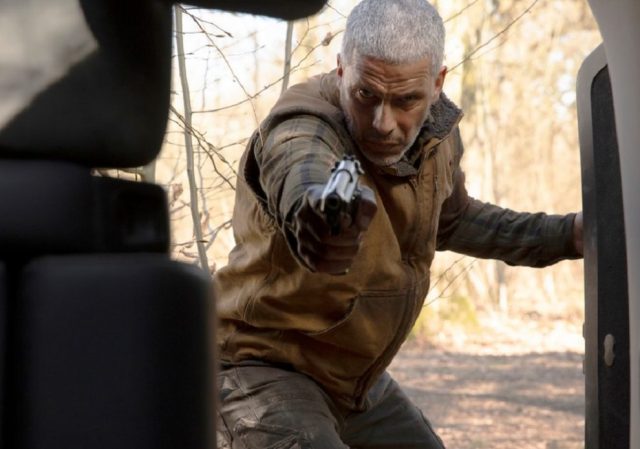 The action set piece is prefigured the moment we see the business our crusty hero runs for a living.

The shoot-out, brawl, blaze and saw-off in the FORESHADOWED sawmill eats up over half of “Earth and Blood.” So the action around that silent-movie era thriller setting had better be good.

It is. But it’s not quite potent enough to get us past how abrupt events were that brought us there, the thin back-story on that owner, Said (Sami Bouajila) and the unlikely dominoes that fall which put him in the position of defending himself, his deaf daughter (Sofia Lesaffre) and his business from a vicious drug gang out to retrieve some stolen cocaine.

Director and co-writer Julien Leclercq (“The Crew,” “The Assault”) makes rough, tough and abrupt thrillers that get down to business and get that business over with — often in 80 or so minutes. Not much time for niceties or preliminaries.

Widowed Said gets out of an MRI, decides to sell the mill, lets his family know, and then figures out that one of his employees (Samy Seghir), an ex-con, was strong-armed into holding some drugs for somebody.

The drugs came from a police station evidence vault. And the ruthless crew that took them, led by Adama (Eriq Ebouaney), shot up the station and a bunch of cops, and isn’t going to be in a bargaining mood when they show up.

In a flash, Said transitions from depressed, concerned father and businessman to tough guy, slapping the ex-con kid Yanis around, barking out orders, sign-languaging his daughter and loading his shotgun.

Actually, I kind of like that. None of this “very particular skills/ex-Special Forces/Jason Statham” nonsense. Just a man in a pinch working a deadly problem on the fly — with his trusty over-under shotgun.

The mayhem that follows is as predictable as that “Perils of Pauline” era setting.

Bouajila is a veteran of gritty action pictures (he even played a guy named “Yanis” in “The Crew”) and throws his weight around like a Franco-Algerian Ron Perlman.

Ebouaney, seen in the recent thriller “Domino,” carries his “heavy” weight with skill.

If there’s a fault to the movie around them it goes back to that word — “abrupt.” We need more to connect us with the characters, pull us into the situation, reason our way out of it as Said must do.

And “abrupt” goes for the ending as well, which is as predictable as any thriller with a sawmill in it that doesn’t have somebody tied to a log at some point can be.