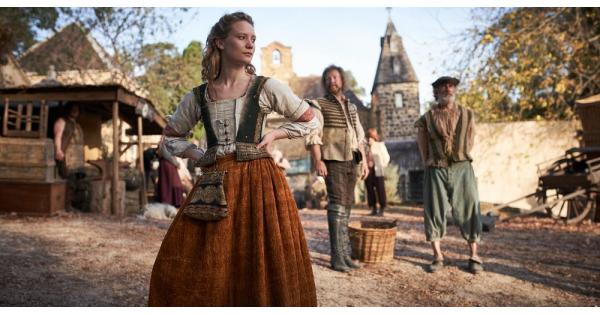 Those ancient puppet punching bags, Punch and Judy, still have lessons to pass on five hundred years after their birth.

“Judy & Punch” is a darker-than-dark comedy that takes us back to those early days, the 16th century. A puppeteering couple struggles to win an audience in an age of ruff-collars and rougher justice, of superstition and mob rule and hanging, beheading, drowning, burning or stoning “heretics” — basically anybody seen by the mob as well, “unusual.”

One lady is accused of “staring at the moon for a suspiciously long time.” That’s all the  good, ignorant citizens of Seaside (“nowhere near the sea”) need to commence to stoning.

“The theaters are reopening,” and that means Judy (Mia Wasikowska) and Punch (Damon Herriman, Charlie Manson in “Once Upon a Time…in Hollywood”) can return to their local stage, “the greatest puppeteer of our time” and uh, the guy who claims that billing.

Judy is the one who mends the puppets, cleans the theater and dazzles with her use of strings. Punch is the one who hisses “I’m an ARTIST” when Judy complains about how “smashy” the show has become.

He insists on giving the mob what it wants — violence.  As long as he stays sober and they have enough to care for their baby, she goes along with it.

Wouldn’t you know it? The one day she needs to go clean the theater and prep for the next performance, the easily-distracted Punch gets distracted — and then drunk. That baby’s a goner.

Punch goes all “Dr.” Phil, “Dr.” Oz” and “Dr.” Drew and mumbles “What’s done is done. I suppose we just move on with our lives.” And when Judy isn’t hearing it, he gives her the “smashing” we’ve always suspected he’s capable of.

Dispose of the bodies, and commence to accusing the elderly couple (Brenda Palmer, Terry Norris) who cook and take care of their house for them. That’s Punch.

“Heretics! They cooked and ate my baby, and moidered me wife!”

Actress turned writer/director Mirrah Foulkes introduces a constable (Benedict Hardie) very much a novelty for Seaside. He may be hapless, but he wants to “investigate” the crime.

“We should be guided by reason and justice!”

The locals call that his “outlandish social experiment,” and insist “Lock them up” and “We’re overdue for a hanging!”

Punch cheerleads all of this. He’s “projecting,” casting the blame for his crimes elsewhere, like certain politicians we could name.

Will there be justice? Will the short arm of the (constable’s) law deliver it? Can we expect Divine Intervention? Will it come via the town’s “heretic” outcasts, the ones who weren’t stoned to death but live like Gypsies in the Black Forest?

Or will the mob and the villain have their way?

The violence is a bit of a tune-out (the director, producer and some in the cast were in the movie version of “Animal Kingdom”). But even if we can guess some of the places “Judy & Punch” will take us to, that doesn’t mean the journey — back to the 16th century, taking a hard, serio-comic look at the 21st — isn’t worthwhile.

Wasikowska’s character arc is fun, Herriman makes a perfectly charming and vile villain, and the period detail in this Aussie production — more Brothers Grimm 16th century than the real thing — gives “Judy & Punch” the perfect stage to tell their satiric story without having to pull any you-know-whats.