Netflixable? Might the love of a horse give a teen “A Champion Heart?” 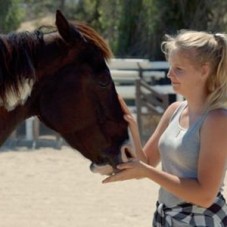 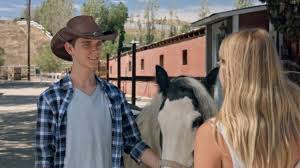 “A Champion Heart” is a bland, harmless little nothing of a “girl and her horse” tale, predictable family-friendly comfort food with little that’ll impress or surprise anybody over the age of eight.

Mandy Grace plays Mandy, a teen who’s moved to Sunset Valley after losing her mother. Her Dad (director David de Vos) was laid off after that, so it’s time for a fresh start in a tony locale — horse country. Yeah, they live in a trailer, but the school’s full of rich kids.

And they seem friendly. Mandy’s invited into a study group with pretty rich girl Zoey (Isabella Mancuso). A little group four-wheeling at the rich girl’s house leads to some spirited competition, and that’s how Mandy crashes into a fence and shed at a local farm.

Winds of Grace is an “equine sanctuary,” where people leave horses they can’t keep or don’t want any more (#whitepeopleproblems), a non-profit.  Temperamental, dodge-blame Mandy has enough character not to run out on her responsibility for this.

So the owner (Donna Rusch) and her dad come to a — say it with me — “She’ll work if off” solution. None of this “I’m not giving up my Saturdays to pick up horse poop!” That’s exactly what she’s doing.

The cast ranges from competent on down the scale, with the director/actor being the weakest link. At least Mancuso manages the “mean girl” basics as Zoey — sexy sneer, evil glint in her eye. And the horse — whom they keep calling “he” and “him” when she PLAINLY is not — has lots of personality.

The script works in “faith” messaging, as Mandy learns how you don’t give up on someone, or some horse, and how if your “faith is stronger than your fear,” you have succeed at show jumping.

The jokes are of the bad pun variety — “What do horses eat on their pancakes? Maple stirrups!”

“Bland” isn’t the worst thing your family-friendly movie can be. “Predictable” can be comforting.

“A Champion Heart” may not be a blue, red or whatever ribbon-winner. But it is a perfectly safe Netflix title to park small children in front of when they’ve gotten on your last nerve.