Netflixable? A sad old man ponders what might have been in “Tigertail”

Forget the “Parks & Rec” and “Master of None” credits on “Tigertail” writer-director Alan Yang’s resume. Don’t put too much stock in the more downbeat and thoughtful “Forever,” either.

With this short but plays VERY long Netflix drama, he takes his shot at a memory play. It’s a story of Taiwan and America, first love and regret and the chill that pragmatism can cast over life, and pass from generation to generation.

It’s doesn’t wholly come off, with ambitions exceeding its reach. But it has enough of that “How my family got here” “Joy Luck Club” essence to make it worth checking out.

“Tigertail” gives a rare (in this country) leading man turn to the formidable character actor Tzi Ma, of “The Farewell” and the upcoming “Mulan” remake.

He is a sad old man, living in a cozy New York brownstone, all alone in a diminished life and surrounded by regrets.

He’s not warm enough to be a comfort to his sad but successful daughter, Angela (Christine Ko), who could use a shoulder to lean on. He didn’t even bother to tell her his mother died. She finds out when she picks him up from the airport on his return home from Taiwan.

He has gone by “Grover” in the United States. He thinks back to his childhood, when he was Pin Jui, raised by his grandmother in the days just after Chiang Kai Shek and his Kuomintang Party and army took over the island of Formosa and made it Mandarin and Chinese.

Pin Jui grew up in the middle of a sea of rice paddies and met the love of his life as a child. Years pass, he moves in with his mother (Kuei-Mei Yang) and works with her in a local factory. But Pin Jui (Hong-Chi Lee) and Yuan (Yo-Hsing Fang) are hot are heavy, poor but dating — perfecting the “dine and dash” as they do.

They long to go to America together.

But there is no OSHA to protect workers in Taiwan, and the factory work is dangerous. Pin Jui wants to get his mother out of there, and when the boss suggests he take up with his daughter (Kunjue Li), duty calls. He will marry her, go to America and make enough money to send for his mother.

And he won’t bother telling Yuan this when he does. 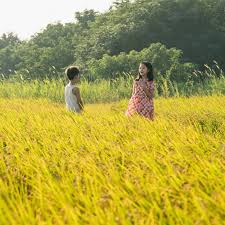 Yang sets up a cause and effect — the years and burdens it took for Grover to grow this thick skin and become the emotionally unavailable old man he now regrets being.

The pain of the practical marriage cut both ways, and the years did not lessen it.

That leaves Tzi Ma, screen newcomer Ko (of TV’s “Dave” and “Hawaii Five-O”) and Fiona Fu, as the older wife Zhen Zhen, each one note to play.

Even the blessed third act arrival of the radiant Joan Chen (“Heaven & Earth,” “The Last Emperor”) cannot lift the pall that’s been cast over the picture by the overlying tragedy.

In screen storytelling, there’s “understated” and “subtle” and “OK, we get it, get ON with it,” and Yang’s overly somber memory play, laden with regrets, comes entirely too close to generating that last reaction.

Character arcs are thin to non-existent. Yang gives his fine cast of players too little to play for us to grab hold of, and the leaden pace just highlights that.

It’s beautifully mounted, with lovely recreations of late 1960s Taiwan. But the downbeat story in the present day offers too little, and nothing even remotely as hopeful as Yang seems to think it is.

This isn’t Netflix’s “The Farewell,” which would be expecting too much. But it’s not too much to expect a more revealing and rewarding story than this.

Credits: Written and directed by Alan Yang. A Netflix Original.