“El Silencio es bienvenido” is an inscrutable parable about the trials of a family vacation punctuated with a mystery perhaps meant to deliver a “moral to the story.”

The debut feature of Gabriela García Rivas doesn’t give us much. It makes us work, bring our own “meaning” to the film. And there are hints that this is because she hadn’t quite made up her own mind in that regard. Inscrutable. And kind of dull.

“Silencio” shows us a couple strained by the dull routine of their marriage, the road-trip ordeal that accompanies every cross-country drive to “grandma’s house” and a sullen teen who lives for her cell phone.

And then, at long last, “something” happens.

The title of this Mexican film (in Spanish with English subtitles) is “The Silence is Welcome,” but that’s something we can’t really gather from its opening acts. Moni, short for Monica (Eileen Yañez) and Joel (Jorge Luis Moreno) are resigned to making this increasingly silent trip several times a year.

Or rather, he is. When 13-year-old daughter Amanda (Daniela Newton) pops off that “luckily (grandma) doesn’t have much more time,” Joel figures “She must have heard that from you.”

This is a marriage fraying at the edges. And the longer they drive through a Mexico where the news is about “terrorist” attacks, where soldiers keep order and run checkpoints, where accounts of shootouts with terrorists dominate radio news, and lurid headlines and violent photos catch Amanda’s attention (she photographs them with her phone), the more the stresses show.

Younger sister Andrea (Andrea Newton) is still Daddy’s little girl, showing off a volcanic rock she’s found at the lake where they stop to rest and skip stones across the water.

But when Dad asks Amanda to summon her sister to lunch, she calls out “Joel says so,” as a reason. She’s acting out against the boring trip and the father who complains about her cell obsession by calling him by his first name.

Monica laments that “We used to talk until sunrise,” when they stop at a resort with a spa, pool and fine dining. He gripes at how “boring” it all is.

Those are what pass for “incidents” in this script. But the drive itself — “slow cinema” defined — has a hint of tension about it, suspense for some big blow up or something more sinister to come. 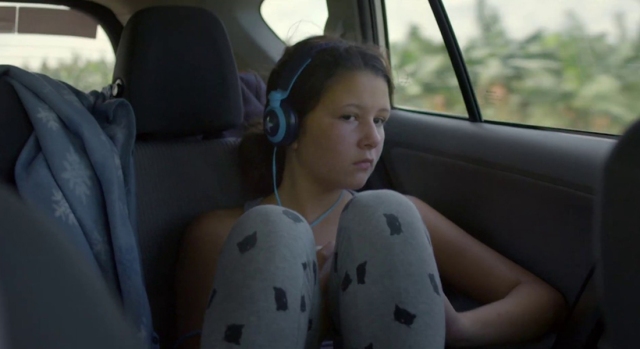 It’s just that “El Silencio” has so little going on that it starts to feel indulgent. Dragging out what little action there is over 95 minutes seems like a waste of an hour.

Is García Rivas making a commentary on Mexican politics, this quiet “normality” glossing over a country roiled by stresses which no one is watching, dealing with or listening to?

But nothing is overt. And the complacency of this family, the “don’t know what you’ve got till it’s gone” noise of life that’s too irritating to deal with, has “Silencio es Bienvenido” sacrificing what might have become an engaging story at the altar of subtlety.

That’s the trouble with “silencio.” Whatever it is hiding, most often it just signifies nothing much is happening.