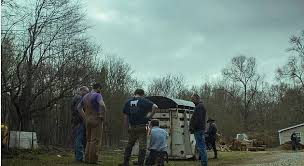 Just outside of Milledgeville, Georgia there’s an organic produce and livestock “eat local” farm run by a collective of combat veterans as a form of self-help therapy, a way of easing them back into civilian life by re-purposing their war zone mind-set.

The product of their labor is farm-to-table “good food,” and the byproduct is healing trauma through a community of people just like them.

“Comfort Farms” is the name of the non-profit, taking its name from a fallen comrade. It’s also the title of a documentary about its work. Filmmaker Carlisle Kellam talks to founder Jon Jackson and other veterans there about their work, their former lives in combat zones and their efforts to “give something” to their community, while taking charge of their own drug-free, therapy-free (or post-therapy) mental health treatment.

Kellam uses interviews, archival combat footage, TV news features and segments from a talk Jackson gives to veterans’ groups, community organizations and schools, papering the film with quotations from veterans, writers like G.K. Chesterton and others about war, the nature of being a survivor of such trauma and the like.

But the big juxtaposition of the film is pairing up all this material about the soldiers with livestock slaughter, which they go to great pains to describe in ritualistic terms.

They butcher the pigs, chickens, cattle, ducks and bunnies “in a spiritual, respectful manner.” They speak about what that process — grim, even to somebody who’s had to pull the trigger for a living — and what it costs them. But there’s little evidence of that, or none shown on camera.

To a one, they’re very in-your-face about this to the film’s viewers, and to the patrons of the farm, who gather for parties, cook-outs and butchering rituals — laying hands on the animals, “make them trust you,” trying to ease the end of their lives, their “sacrifice” for our “good eating.”

You don’t like to see this? That’s “cowardly.” So “eat more vegetables.”

There’s more going on here, with men who have lived through bloody injuries and watching friends die, coping via what they acknowledge is “never an easy thing,” taking an animal’s life with a gun, knife or hatchet.

Kellam, by limiting his film to “in their own words,” reinforces the self-help ethos that Jackson and his fellow vets preach. Having veterans talk about “misconceptions about veterans,” about the flawed tendency of the public and the media to lump them all into a group, lauded and fund-raised for as “an object of pity” or “an object of worship” (Hellooooo Toby Keith.) is unusual and enlightening.

But its narrow “in veterans’ own words” focus allows the film to avoid the big psychological questions about the personailty types that join the “all volunteer military” and what people who have been in combat really get out of spilling all this blood once they come home.

They’re not wrong in that “locally grown” and “if you can’t kill it, maybe you shouldn’t eat it” thinking. But “Comfort Farms” leaves a lot skirted, unspoken and seriously-under-analyzed.

Not everybody in this post-VFW era club served in combat. And while every person and situation is unique, there are psychological profiles that would be helpful to consider, explanations that those too close to the situation have a hard time articulating.

They’re doing good, both for themselves and for their community. And anything that breaks the patterns of “troubled” combat survivors — suicides, domestic violence, joining motorcycle gangs and the like — is to be celebrated.

But personally, I could use a little of that analysis and a lot fewer too-quick-to-register quotations, and maybe fewer of the somewhat random insertions of graphic animal slaughter in all this talk of healing.

Thank you for your service. Now let’s hear what it “typically” does to someone who makes that sacrifice, or who “enjoys” the “good action” and adrenaline rush of combat (several say so) and signs up for repeated tours.

And what’s really going on that makes them want to come home to kill cows, bleed-out pigs and chop the heads off ducks?