Movie Review: The bloody-minded fantasy that is “True History of the Kelly Gang”

Posted on April 2, 2020 by rogerinorlando

Ned Kelly is Australia’s Jesse James, a pioneer-era outlaw hero (to some) and icon of Aussie defiance, independence and Old West-style violence. He robbed and murdered his way to infamy, led a revolt against British oppression and wrote, in essence, his own myth and eulogy with his “Jelrilderie Letter.”

So it’s no wonder he’s deeply carved into the ex-prison colony’s national identity and Aussie machismo. He’s been depicted on films since the birth of Australian cinema. And now, half a century after rocker Mick Jagger played him and 40 years after the semi-official end of punk, he gets a cross-dressing punk rock treatment in “True History of the Kelly Gang” from, of all people, the director of “Assassin’s Creed.”

Justin Kurzel promises a bleak, unblinking depiction of what created Kelly — the wasteland, the family history (Kelly’s Irish father was a criminal “transported” to the colony in the mid-19th century) and political climate — an emerging sense of “Aussie” and an unending antipathy for “those pommy bastards,” the British.

The film, based on the historically bastardized novel (by Peter Carey) of the same title, is a grim and uneven slog — visual flourishes, inspired casting that leads to a few brilliant performances, and an exhausting mid-section that halts the action and shortchanges the “career” of the outlaw (“bushrangers,” they called them) and his army.

The flashes of action early thin out during the later acts, returning for the operatic violence of the finale, when Kelly’s armor-plated “army” faced off with an army of the law.

If North Americans know anything about Kelly, it’s that — Jesse James facing his final shootout behind iron plates and a neo-Medieval helmet.

“True History” begins in an ugly childhood, with an ineffectual and lawless father and more importantly his willful, raging mother (Essie Davis of “The Babadook”). Ellen Kelly’s awfully fond of the phrase “real man,” as in “there’s no REAL man” in the territory (Victoria) to stand up to the outrages facing the family, the liberties she lets the British constable (Charlie Hunnam) take under Ned’s dad’s own roof.

Russell Crowe makes Ned’s mentor, the bushranger Harry Power, a grandfatherly type fond of his pipe, and determined to make the kid over in how own violent image.

“I’ve told your mother ‘No one can ride with me if they can’t pull the trigger!'”

George Mackay (“1917”) becomes the fearsome and wild-eyed Ned as an adult, forming his gang, accepting their decision (passed down from his father, it is implied) to disguise themselves as women when the need arises.

It’s here that the movie staggers and halt, with Kelly’s odd connection to another constable (Nicholas Hoult), his mother’s imprisonment and his romantic tie to the prostitute Mary Hearn (Thomasin McKenzie of “JoJo Rabbit”). 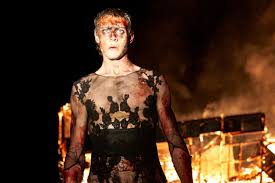 The film only picks up with its finale, and even that grand, murderous and visually stunning spectacle is somewhat spoiled by a preachy epilogue.

Kelly’s brainstorm about armor plating himself has two sources, according to “True History” — an armor plated (anachronistically so) shack that Power hid out in, and Kelly’s exposure to images of the U.S.S. Monitor, “impregnable” ironclad of the U.S. Civil War.

Mackay’s heated performance is matched by Davis and Crowe in its intensity. Everybody else is having a vamp, especially Hoult and Hunnam, with Hunnam so deep into whatever accent he’s doing that he needs subtitles.

An exception? Young Ms. McKenzie, unconvincing and not particularly compelling, perhaps driven by second thoughts about playing a “low woman” in the picture featuring her first nude scene.

But if that’s the case, she’s not alone in losing her nerve. The film’s daring, its rock-scored punk vibe (Crowe sings, singer Marlon Williams has a role and a song, and rocker Nick Cave’s son is in the cast), the whole “run with the cross-dressing” myth, suggests a picture a lot more challenging and history-upending than Kurzel, in the end, delivers.

Credits: Directed by Justin Kurzel, script by Shaun Grant based on the Peter Carey novel. An IFC release.