Netflixable? “Die Ontwaking” is one long “spoiler alert” of a thriller

Posted on January 30, 2020 by rogerinorlando

How much is “too much” to reveal in a movie review?

Ordinarily, you relate just enough of the plot and characters to set the story in motion, and everything else is value judgements — how good the acting, writing, production design etc. are, how original the entire enterprise might be.

But in movie reviewing, we’re always using analogies — “comps.” What movie does this one borrow from/compare to, use as its inspiration?

With “Die Ontwaking,” I dare say translating the Afrikaans (It’s a South African serial killer thriller) title will give away the game, to the movie-savvy.

“The Collector” is what it translates to, an adaptation of the first of a series of novels about a African/Aboriginal artifacts dealer. And Hell’s Bells, even that gives away more than it should.

“Series” of novels about a “collector.” What do we know about the killer and the film’s finale from that description?

If I mention “Psycho” and “Silence of the Lambs,” you can infer even more about it, the movies/books that novelist Chris Karsten was dabbling in as he cut-and-pasted this story.

But I’m not going to sweat the “spoilers” here, as I can sum this one up in just two words — grisly and perfunctory. It begins with an unseen cutter gutting and skinning a rabbit and quickly escalates into human slicing, people grabbed and tied up for butchery as the cops try to figure out what’s going on.

The subtexts here are almost more interesting than the “We’ve got ourselves a collector, slicing off pieces of peoples’ skin” that the police will quickly conclude.

The title character, played by Gys de Villiers, runs an antiques gallery. He’s an elderly creeper who specializes in masks from around the world.

No no, he can’t sell that roll-top desk, it’s his mother’s. He talks about his mother a lot.

No, that tribal mask isn’t for sale either. Only men can wear it.

That’s the other subtext of interest, here. The men, to a one, are committed sexists — womanizers, harassers and bullies.

Deputy Nesa (Juanita de Villiers) takes jabs from the boorish Fred (Gérard Rudolf ) on the first crime-scene, where the first body is dumped. Here are your rubber gloves, “just in case you break a nail” (in Afrikaans, with English subtitles).

The coroner is equally contemptuous — “Such an important case, and you make an amateur the investigating officer!”

Her boss, the Colonel (Paul Eilers) is there, which is why she has to let this crap roll off her back.

But when a reporter (Jaco Muller) shows up and begs for a date, mid-interview, North American viewers of this 2015 film might wonder what century this is.

The Colonel burns through cigarettes, has hints of corruption and is dismissive of protocol.

The pathologist has his Dr. McCoy moment — “I’m a pathologist, not a psychologist” dammit.

The deputy acts like “an amateur” more than once.

And the collector? He keeps on collecting, even as red herring suspects are dredged up AFTER we’ve been given a good, solid EARLY taste of who is doing this and what he’s obsessed with. 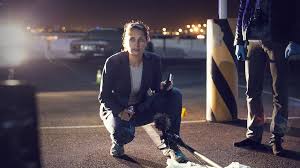 The interrogations, the slow pace of piecing together a “puzzle” that’s all but given away right from the start, underscore that “perfunctory” knock I made earlier. The crimes, the criminal, the story beats and the victims are all recycled from the two films I mentioned at the outset.

But if you’re going to steal, maybe understanding what you’re stealing and why these ingredients and archetypal characters WORKED in the earlier films is a must.

Credits: Written and directed by Johnny Breedt, based on a Chris Karsten novel. An Indigenous/Netflix release.