Posted on January 1, 2020 by rogerinorlando 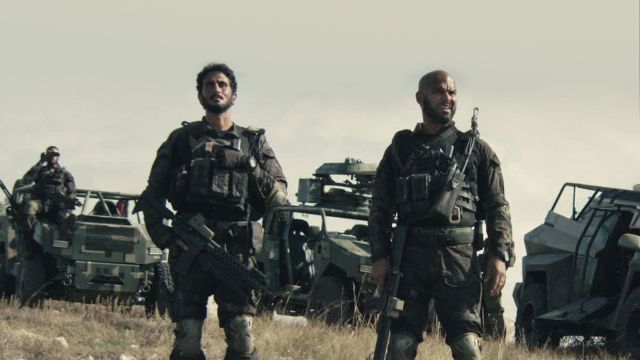 One great thing about the rise of Netflix streaming is its contribution to the general public’s knowledge of film history. For instance, while you probably remember the Jake Gyllenhaal/Sam Mendes stresses-of-combat classic “Jarhead” from 2005, who knew there have been three sequels?

Sure, they’re not directed by or starring anybody with a big name, and they’re of steadily diminishing quality, but they’re out there.

“Jarhead: Law of Return” is the new one, a film that invokes Israel’s “Law of Return,”the legal justification for granting Israeli citizenship to any Jew anywhere in the world. That’s how Major Ronan Jackson (Devon Sawa of “Final Destination” and TV’s “Nikita”) ended up there, a U.S. trained F-16 pilot flying for the Israeli Air Force, married to an Israeli.

Jackson’s mother was Jewish, so that’s how he landed “oleh” (immigrant) citizenship status.

But as anybody knows, “Jarhead” is U.S. jargon for a Marine. How’re we getting the Marines into Israel to help rescue Jackson after he’s shot down over the Golan Heights? Jackson’s daddy (Robert Patrick) is a U.S. Senator. Only a joint Marine Corps/Shaldag (Israeli commandos) can save Jackson from the clutches of the Iranian-backed Golan Freedom Brigade, and their anonymous, murderous leader, The Ghost (George Zlatarev).

The Israelis are all mysterious, anonymous warriors — “Our names, like God’s, are not to be spoken.”

The Jarheads are all, “Yeah, you’re Brenner, you’re Brodetsky…”

They quickly find themselves in the thick of it, tracking the missing pilot, fighting and dying on a mission that “does not exist” in a desperate race against the clock.

The firefights are routine, with the odd eye-rolling boner of a moment. The pilot fends off terrorists armed with truck-mounted machine guns and AK-47s with just his sidearm.

Maybe that’s because he’s hiding out in the only field of bulletproof sunflowers in all of the Middle East (filmed in Israel and Bulgaria). Time and again, Palestinian fighters hold their guns up high to shoot OVER the flowers when Jackson is hiding IN among them. 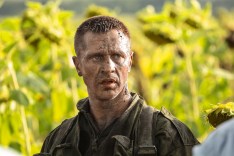 The ordinance ranges from “Sure” to laughable. Wait’ll you see what it takes to bring Jackson down. The wacky modified dune buggies of all low-rent commando movies turn up as super secret assault vehicles. A sniper uses the automatic weapon with the shortest barrel on earth to become Arabic Sniper.

Then there’s the debate in HQ, where the Marine four-star general (Ben Cross of “Chariots of Fire”) would be a lot more impressive to the Israelis if he wasn’t plainly wearing his stars on a jacket with sergeant’s stripes on the sleeves.

Actor-turned writer-director Don Michael Paul specializes in low-budget sequels WAY down the line from the original “Death Race,” “Sniper,” “Bulletproof,” “Scorpion King” or “Kindergarten Cop,” so don’t expect him to sweat the details. He scripted the epic fiasco “Harley Davidson & the Marlboro Man,” so the hard-boiled dialogue is…hardcore.

“This is Benghazi all OVER again!”

Yes, the whole affair plays like Israeli propaganda, gory and trigger-happy but cut-rate, inept and unsatisfying. But Universal has to make up that cash they lost on “Cats” somewhere.

MPAA Rating: R for strong violence and language throughout, and some sexual content/nudity

Written and directed by Don Michael Paul. A Universal release.