Posted on December 30, 2019 by rogerinorlando 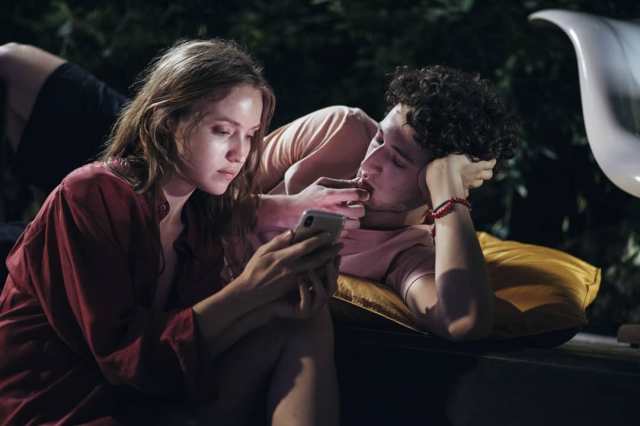 The reason to mention the sometime actor and director of such violent, lurid and iconic indie films as “King of New York” and “Bad Lieutenant” in the headline of this review is to zero in on the most promising possibility of “The App.”

Abel Ferrara plays the American director of an Italian production of “The Life of Jesus.” The filming of that movie-within-a-movie doesn’t go well. But the mere presence of Ferrara on the set influences the neon and LED-glow look of this deathly dull “app that messes up your life” thriller.

We see a Rome and Milan of tacky/modernist hotel suites, of ancient statues freshly capped with neon halos, of LED crosses and faces lit with the soft glow, or strobing pulses, of a smart phone.

Whatever else co-writer/director Elisa Fuksas (“Nina”) is aiming for here, visually she’s paying homage to Ferrara. Hell, if she didn’t have other credits, I’d suggest her name is a Ferrara construct. Say the surname out loud to hear where I’m coming from.

“The App” is about “Italy’s most famous heir,” a rich pretty boy (Vincenzo Crea) named Niccolo whom we meet in bed in Los Angeles. He’s having post-coital pillow talk with Eva (Jessica Cressy), his grad-student girlfriend.

Niccolo hasn’t mentioned the fortune he’s an heir to. He wants to make it as an actor on his own, sort of like Kate and Rooney Mara. And he’s just scored his big break — playing Jesus for Abel Ferrara (never identified by name) back in the Old Country.

But Eva has a request. Sign up for this popular dating app “for people already in relationships, but curious” as to who else is out there. It’s for her Phd thesis, she says. He’ll be “Lorenzo,” she’ll be “Sara.” Who knows, maybe they’ll find out they’re “perfect” for each other, she coos (in Italian with English subtitles, or dubbed into English).

This is the last thing he he needs, but sure. He’s about to play Jesus, “and a lot of actors have gone a little mad” in that undertaking. His family business is about to undertake a huge merger and his “place within the company” has to be sorted (he’s estranged from his parents). Nothing like a little role-playing on a sex hook-up app, at the insistence of his girlfriend, to get in the right frame of mind.

Niccolo finds himself interrupted, and intrigued by “Us,” the app. Some video message him, teasing and tempting. Another gets her hooks in him with just her voice.

And there’s the head of housekeeping at the swanky Rome hotel where he stays. Ofelia (Greta Scarano) is a tad too attentive, too fretful and sneaky, a trifle more Catholic than seems safe — considering the role he’s about to play and the amorality she thinks he lives by.

Thanks to the film he’s making, and the app, Niccolo finds himself “tested,” in ways almost totally unlike Jesus (a serpent co-stars in one scene), lying to Eva when she comes to visit and pining for this “Maria” woman of uncertain identity who keeps setting up phantom meetings, enticing him with her sexy voice, talking him out of deleting the app.

The poor guy is sure to crack up.

As colorful and pricey as the production values look, the cast in front of those settings is never less than drab. Little bits of sexual titillation don’t alter the fact that our lead is a curly/pretty hunk…of dead weight. The supporting cast fares no better.

The plot teases promising twists that don’t quite develop. A Fellini-esque moment or two — Niccolo being tied to a cross for a green screen tests — doesn’t animate “The App” enough to warrant your time.

Still, give it up for the settings, the tackiest bedrooms this side of Vegas, or those depicted in “Uncut Gems.” Maybe Ms. Fuksas should have signed Ferrara on as a script doctor. He’s made plenty of unwatchable films, but at least he gives the viewer something awful to latch onto. Fuksas doesn’t even do that.