Posted on December 13, 2019 by rogerinorlando 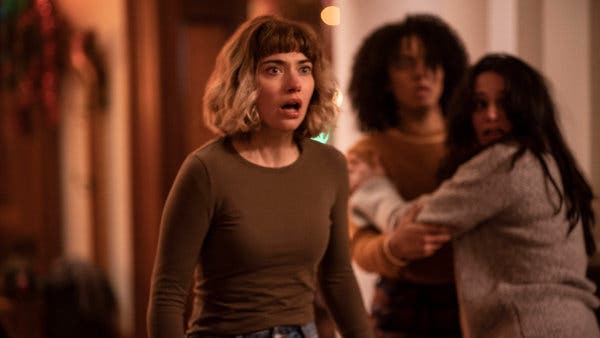 Love just LOVE that Imogen Poots. Even if there is no way that line will ever NOT be funny.

An actress who has made interesting choices ever since “V for Vendetta,” “Me and Orson Welles” and “28 Weeks Later” put her on the cinematic radar, the Great Brit uses her one last turn as a college coed to do a “statement” movie on horror and its incurable, genre-old desire to slaughter pretty young things like herself.

If only they’d get around to that a tad earlier. But no, we’ve got to have an hour of summary slaughter, a collection of the dullest, least sympathetic and most poorly set-up murders in the history of Dead Teenager Movies.

There’s time for a little cheesecake, the ladies of “Moo Kappa” dressing in Santa’s Little Helper mini-dresses to tease, taunt and blast a little truth-to-power to the jerks at “Deek,” Delta Kappa Epsilon. One suspects student activist Kris (Aleyse Shannon) is behind it. But Riley (Poots) is shoved into the skirt and into service as well.

Riley has history with the bro-iest of the frat bro fraternities. Riley accused the former president of the frat of attempting to roofie and rape her. Riley reported this and “nobody believed you.”

And now that she’s dissed them to their smug faces, that frat is going to be out for revenge.

And then there’s this professor and Hawthorne U. alumnus who teaches “the classics” to the student body, and “there’s a petition circulating to have me fired” for it. He’s played by “Princess Bride” and “Saw” vet Cary Elwes.

SOMEbody is already sending out boringly-threatening text messages supposedly from the “founder” of the college and its most infamous fraternity. As the school is 200 years old, you could see why the kids wouldn’t take that seriously.

But this texter or texters is stalking women while wearing a Grim Reaper cowl and mask, making text jokes about what a ham and a sorority girl have in common — “They both SQUEAL before they die!” Take heed, ladies. Something horrific is going down.

Or would be if “Black Christmas” wasn’t the worst-directed horror movie in recent memory. There is no suspense, no time allowed to summon up terror, no novelty to the killings. And those elements I mentioned that “set up” the story? They make for the most excruciatingly dull first hour, and nothing that follows can atone for that.

An icicle? Christmas tree lights? Seems to me those might have turned up in the seven earlier incarnations of this horror title. 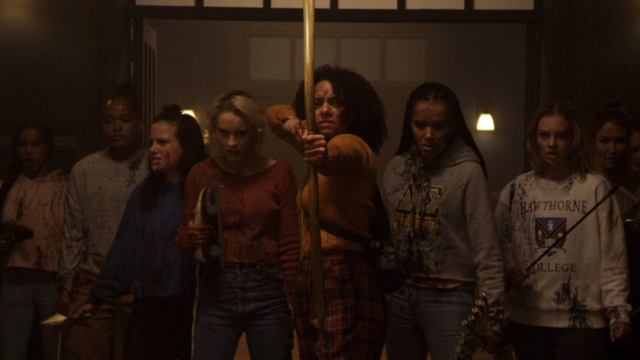 Poots gamely tries to bring a little acting polish to a genre where perfect hair, smiles and cleavage have always been the priorities.
But actress-turned-director Sophia Takal, who co-wrote the script, cannot for the life of her figure out what’s scary and what isn’t. There isn’t a second of suspense in this, not one sorority bonding or sorority sisters bickering moment is believable.

The picture begins badly, attempting a tone-setting menstrual pad gag scene early on, a “diva cup” moment that falls so wincingly flat that you hope the actress who performs it doesn’t let her parents see it.

Yes, date rape is horrific. Not the worst idea to motivate a vengeance fantasy with. But somebody somewhere should have had a clue, early on, that there’s more to a horror film than saying how “woke” you’re being. Somebody should have seen this wasn’t scary and was never going to be scary without rewrites and a director with a feel for the medium, who realizes how to make murders chilling, horrific and empathetic.

When things go this wrong, even having Imogen Poots can’t save it.