Movie Review: Who can the natives trust in their fight against a dam on the Amazon? “Sequestrada” 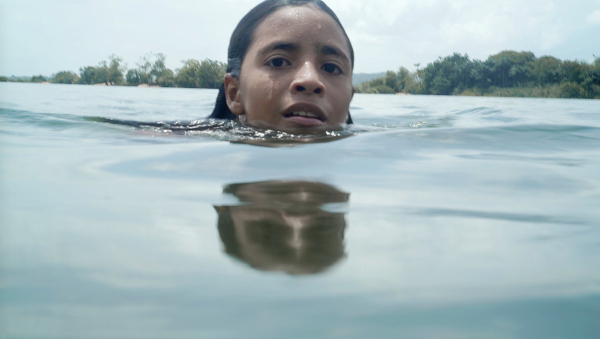 “Sequestrada” is a lyrical docudrama whose advertising tag-line could very easily be, “Well, we didn’t see THAT coming.”

It’s a Brazilian/American co-production about the Amazon, the indigenous people who live there and a dam that’s being pushed by the government and financed largely by Wall Street.

It uses news footage to set up the story, the years-long struggle to put the Belo Monte dam right in the middle of indigenous tribal lands in the upper Amazon. A 13 year-old girl from the Arana people, Kamodjara Xipaia, poetically narrates the folklore and story of her tribe of 104 — “I am number 85” (in Portuguese, with English subtitles) she tells us, in one of her river-swimming idylls. “We don’t want to leave.”

And then we meet those conspiring to uproot them.

Tom Vogel (Tim Blake Nelson) is a New York “fixer” for the investment company anxious to see that this project move forward. Over 140 dams are planned, and any delay could give the whole world the chance to see how destructive this could be to the locals, and to the Earth’s climate. Dams along the rivers of the Earth’s lungs — the rainforest — are a catastrophic environmental mistake.

Tom is rushed onto a plane by Grace (Gretchen Mol), promising “I’ll be gentle.” He’s just got to sweet talk the government official in charge of making a final report on the project.

“I’ve dealt with guys like this in more countries than you can name!”

The “guy” here is Roberto (Marcelo Olinto), a bureaucrat with the indigenous agency FUNIA who may have his orders from above to “make this happen.” But when Tom sidles up to him in a bar, Roberto gets his back up.

“You’re devoting your life to a TRAGEDY! For you, this has nothing to do with the truth!”

Tom’s efforts to lobby the Arana directly just show him as a slightly-less-menacing version of “The Ugly American.” No deal.

Kamodjara’s people are part of the protests that make the news. “Stop Belo Monte or we will stop Brazil!” That’s why she and her family visit the closest small city, Altamira. And that’s how she becomes separated from her people, a tribe Roberto admires (to Tom) as “pure.”

The main “didn’t see that coming” in this Sabrina McCormick/Soopum Sohn film is given away in the title. “Sequestrada” translates as “kidnapped.” Kamadjara finds herself being trafficked, and the film turns into a scheming, double-crossing thriller as we fret over her fate and just who will be blamed for it.

That twist in the plot isn’t the only one, but it is the driving force of the film and is quite melodramatic. Nelson’s Vogel gets a lot closer to this situation than anyone who doesn’t speak Portugeuse would want. But he’s a good actor who doesn’t come close to convincing us that he’s afraid he’s about to die.

Young Kamodjara projects the proper innocence in scenes that threaten to turn creepy and criminal at any moment. Yes, that’s also melodramatic, and it contributes to the film losing track of the big message it wants to deliver and the bigger story it wants to tell.

That can be as frustrating as the film’s bizarre sympathies. Who exactly do we root for here?

It’s also frustratingly subtitled with white lettering, which considering the washed-out backgrounds, white clothes, etc., leaves a non-Portugeuse speaker at a loss in catching the nuances of the threats, etc. I thought this argument was settled in the early ’90s. YELLOW lettering for subtitles works best.

Those complaints aside, the slices-of-life that “Sequestrada” shows us as it makes its arguments and counter-arguments (“Hospitals, schools, medicine, houses” are promised to the Arana.) sell the picture and tell its story.

If this rainforest bespoiling melodrama leaves the viewer unsatisfied, that’s because there is no happy ending here. You can’t help but think as you’re leaving the film that everything you saw here was doomed, save for the bureaucrats and Wall Street types. Everything green and everyone living in tha green is under threat.

Credits: Written and directed by Sabrina McCormick and Soopum Sohn. A Strand release.