Netflixable? “The Laundromat” takes the cute approach in explaining The Panama Papers scandal

Posted on October 19, 2019 by rogerinorlando 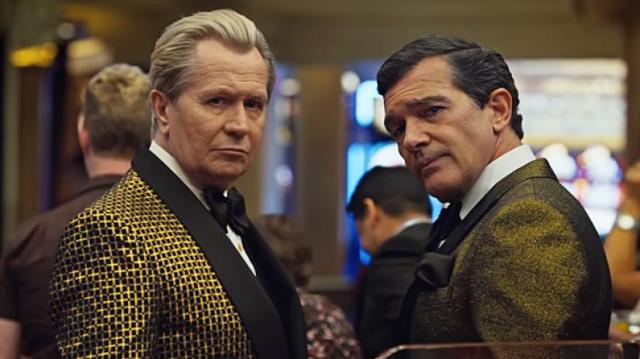 And even that isn’t enough, by itself, to dive into the horrors of this scandal.

The corruption runs so deep, the conspiracy is so widespread, that settling in to any understanding of this democracy-crushing, billionaire-enabling global criminal enterprise — with real murderers, drug lords and organ harvesters wrapped up in it — is enough to make one despair about whole nations and an entire planet that’s been “rigged.”

Director Steven Soderbergh doesn’t hand out pitch forks, or lay out long lists of names that’ll be, as the old joke goes, “the first against the wall when the revolution comes.” He delivers a sermon about this overwhelming scandal tucked into a cutesy, all-star/globe-trotting tragi-comedy “hosted” by movie stars — Oscar winner Gary Oldman and Antonio Banderas — playing the two bankers who ran “The Laundromat,” Panamianian shell-company impressarios and money-laundering lawyers Jürgen Mossack and Ramón Fonseca.

It’s Soderbergh’s shot at “The Big Short,” and it falls somewhat short. It’s convoluted, basically because it has to be. The story is necessarily episodic as the cast of characters is international and hard to pin down and connect. If you’re lost, you’re not alone. The evidence suggests Soderbergh and his screenwriter were, too.

When you’re telling a tale that begins with a widow (Meryl Streep) trying to figure out why the insurance company that covered the tour boat that sank and killed her husband (James Cromwell) wasn’t being forced to pay out, how Russian oligarchs are able to steal a Vegas condo out from under her via her realtor (Sharon Stone), with African looter/robber barons (Nonso Anozie) and murderous Chinese oligarchs (Rosalind Chao) and powerful people of every stripe (the Trump and David Cameron families are implicated, of course) are mixed up in it, finding your way is a lot harder than navigating this long, run-on sentence.

And through it all, the clipped German accent of Mossack and the sultry purr of Fonseca give us the list of “Secrets” that enable this world to exist. “Secret 2: It’s just shells” let’s them pontificate on the tax havens and money-laundering qualities of banks, etc. set up in Cyprus or Panama, Nevis and Nevada, The Seychelles and Delaware.

“Credit is just the future tense of the language of money” sounds sexy and sinister, coming out of Banderas. 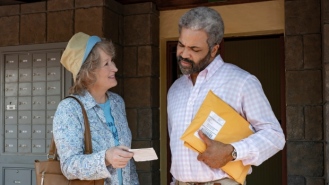 The scale of the scumbaggery Soderbergh tries to weave in is daunting to describe, much less to pull off. Jeffrey Wright plays a shell-company middleman, running thousands of them out of a post office box on Nevis in the Leeward Islands. That moral shortcoming spills over into his personal life. You get away with one crime, why not add a second, secret marriage and family?

Matthias Schoenaerts is a bribe-arranger, money-mover and would-be blackmailer who figures there’s an illicit fortune to be made off the slaveholder class in China.

David Schwimmer is a hapless Lake George, New York resort manager (with Robert Patrick as his tour boat captain) dismayed that “trying to save money” through a dubious Texas insurer has mixed them all up — including Streep’s widow, Ellen Martin — with the bogus business empire of The Laundromat, via its Nevis outpost.

And on and on it goes.

“You think we know everyone we create a company for?”

The film’s flippant style — all these shots of Oldman and Banderas in tuxes, in white linen suits, walking through caveman “barter” business transactions, drinking Blue Curacao on a beach in Curacao as they’re “explaining” all this — would go down easier if they really were EXPLAINING it.

In other words, take a bow for making the effort, but better luck next time.

Credits: Directed by Steven Soderbergh, script by Scott Z. Burns, based on the Jake Bernstein book. A Netflix release.