Netflixable? “Carrie Pilby” is “Young Sheldon” without the sex appeal

Posted on October 7, 2019 by rogerinorlando 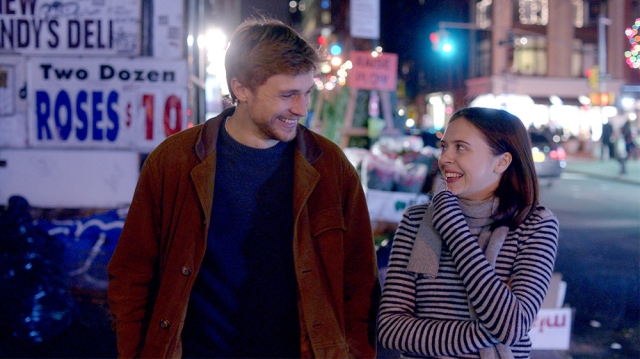 The reason you stay through to the closing credits when reviewing a film is basic movie-reviewing ethics. It’s a rule.

Here’s another one. Never let a rom-com’s touching if obvious ending change your mind about the 90 minutes that preceded it.

“Carrie Pilby” starts feebly, soldiers on gamely and ends with the warm fuzzies. The reviewing cliche “mixed bag” was coined for comedies like this.

Bel Powley is a capable young Brit with impressive range, shining in films such as “Diary of a Teenage Girl” and “A Royal Night Out,” going amazingly trailer trashy look in “White Boy Rick.” But tackling the latest “so smart she/he isn’t socialized or connected to the real world” script — “Big Bang Theory” ruined it for everybody, kids — wasn’t her smoothest move.

She’s a rich-enough British transplant, living in Manhattan on Daddy’s dime, seeing a shrink (Nathan Lane) London dad (Gabriel Byrne) pays for, all to help her “be happier” with the life her skipped-grades, Harvard degree and 185 IQ has brought her.

The therapist wants to know if she “made any friends” this week. No, but she tore through another 17 books. He’d like Carrie to stop “rubbing your exceptionally high IQ in other people’s noses,” take the ear buds out so that she can’t drown the world’s noise with classical music warhorses (“Peer Gynt” suite, etc.) and engage the world.

“You’re such a contrarian.”

Dr. Petrov gives her a list. It’s Thanksgiving in New York, time for her to “Go out on a date, make a friend, get a pet, do something you loved as a child, spend New Year’s Eve with someone.”

Fine. Sure. Pet store? Goldfish, “two for one.” She names them Spencer and Katherine.

Dad arranges a job for her, proofing legal briefs after hours at a big law firm. That’s where Tara (Vanessa Bayer of “Saturday Night Live”) becomes almost a confidant.

And guys? That’s a cloying conceit of producer (“Mean Creek”) turned director Susan Johnson’s debut feature. Forget every rom-com about how “hard it is to meet someone” in The Big Apple. “Cute boys” are falling in front of Carrie at every turn.

Flirty waiter at her restaurant of habit, perky pet store clerk who cons her into taking two goldfish, cute neighbor (William Moseley of “The Chronicles of Narnia” films) who plays his didgeridoo in the alley behind their apartment building — they’re everywhere.

But being clinical-methodical and on that “Young Sheldon” spectrum, Carrie decides instead to “go on a date” via the personal ad that most offends her. She’ll show up the engaged jerk (Jason Ritter) who wants to “be sure” he’s making the right decision, marrying his longtime fiance in two months.

There are therapy sessions in between Carrie’s various smart girl/bad choices, flashbacks to a formative experience during her college years (Colin O’Donoghue) and Daddy issues to resolve on one side of the pond or other.

None of which distract us from the nakedly plain direction this is going. The script is so hellbent on taking us there that it underlines the big “tell” — how a young lady knows the man cares — and has Carrie utterly abandon her intellectualized moral code at the drop of a hat — or shirt.

Powley is a perky presence, and while Lane keeps his Funniest Man Alive persona under a beard, glasses and professional decorum and the assorted possible-beaus are the bland leading the bland, “Carrie Pilby” never rises to the level of hateful, or even annoying.

It never rises above mediocre, and that’s the problem.