Netflixable? When in Lima, beware of the “Sinister Circle” 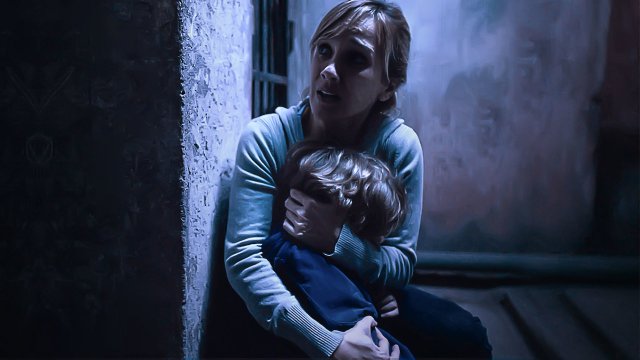 No matter what obsessed fans think, sequels have to stand-alone as films, stories that work in their own right. Relying on everybody seeing your new movie having seen the original film simply isn’t cricket.

That goes for every “Mad Max,” every “Tim & Eric” outing, every “Avengers” and every “Sinister Circle,” a Peruvian horror film that references, and quite heavily, “Cementario General” (“General Cemetery”), the 2013 film this one refers back to, not-quite-constantly.

It’s about a surviving relative of one of those “taken by robed” demons in the first film, a psychotherapist whose belief in science runs up against the supernatural as she tries to get to the bottom of what happened to her sister and what is happening to her mental patient mother while keeping her little boy safe in a city he doesn’t know.

Fernanda (Milene Vásquez) questions her profession after dealing with a Mexico City patient she could never help, a man who begs her to “Help me get out of here” (in Spanish, with English subtitles). “If you don’t he’ll KILL me!”

Someone, some-THING, was coming for him. We don’t have to guess whether or not it did.

Fernanda is widowed, and has a traumatized child at home. Julio (Matías Raygada) is suffering from “selective mutism,” ever since his father died. He won’t talk, a big reason he’s as obsessed with his tablet as he is.

When his mother drags Julito to Lima from their Mexico City home, the kid’s going to have a LOT to talk, or at least SCREAM about. The wraith he sees wandering the backyard of the family apartment building is his first clue.

Director Dorian Fernández-Moris (he also did “Cementario General”) manages the basics with some skill. The kid may insist (typing his plea “FEAR” onto his tablet) on sleeping in Mom’s bed. But that doesn’t keep him from wandering the halls, seeking the source of the skittering and footfall noises he hears in the middle of the night.

Julio, pal, make up your mind. You’re either too afraid to sleep on your own, or brassy enough to seek the source of the spookiness only you are witness to.

The demons haunting him have a thing for his iPad. There’s a tug of war over the charger cord with a gnarled arm and hand, a Close Encounter from The Other Side when he drops it under his bed.

Not being able to scream suppresses the poor child actor’s performance. Never for a second do we believe he’s in mortal danger, because we don’t see it in him. He’s not skilled enough to do it with gasping, eyes-bulging mime. The director doesn’t help him get the terror across.

Fernanda’s mother (Claudia Dammert of “Proof of Life”) is a danger to herself and her daughter during her visits. But pesky journalists like Alejandro (Marcello Rivera) have questions about what’s REALLY going on. Local TV is still covering the mass deaths of “Cementario General” years after the fact.

Yes, something IS going on — with that mass death a few years ago, in that cemetery, in the hospital and with Fernanda’s family. But what in the name of Mia Farrow could it be?

There are a couple of decent hair-raising moments in “Sinister,” and a lot of dull rehashing, exposition and delays in getting to the point.

Take away the flashbacks and it might still stand on its own — teetering, not entirely upright, but not so reliant on the first film to really need all these flashbacks.

As pointless as they seem, we can guess why they’re here. There’s not enough movie in “Sinister Circle” without them. And something’s got to fill in the time before we get to the crappy cop-out ending.