Movie Review: Every golfer dreams of the “Round of Your Life” 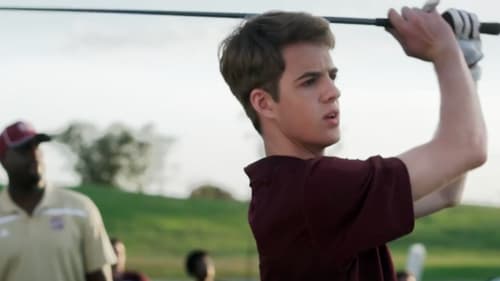 Richard T. Jones is a marvelous character actor of long standing. You have seen him most recently in TV series, from “Hawaii Five-O” (he was the governor, early on) to “Teachers” and the still-running “The Rookie.”

He brings his easy authority and warmth to a “tough love” coach in “Round of Your Life,” a tale of golf, family legacy, grief and faith.

But every time the kid opens his mouth, I wished Jones was his acting coach instead. Hara, whom the credits identify as a young writer and director, may be reaching for something of a teenager’s slouch, affecting a “too cool to care” that suits the character.

It’s just that every rushed, slurred line reading screams “AMATEUR” and “Give the kid some COACHING, and another take!”

Whatever his golf game, whatever the failings of the predictable but functional script, Hara’s performance is representative of how “Round of Your Life” never had a chance. It’s not all his fault, but this melodrama only manages a couple of light moments and one fairly touching one. And time and again, when a scene depends on the leading man to make it and the movie works, he duffs it.

We meet Taylor as the video-game distracted kid is blowing his chance at making the San Antonio Christian school golf team.

“There’s too many golfers in this family already,” he mutters to his older brother, Tucker, a touring pro who admits he paid off golf announcer Jim Nance so that he’d be nicknamed “the green whisperer.”

Dad is so irked he takes away the boy’s phone.

This argument ends with that standby of lazy melodramas — a car accident. Dad’s in a coma, but only Mom (Katherine Willis, solid) seems torn up about it in the hospital. The doctor’s words “a life threatening brain injury….induced coma” don’t phase Taylor.

He’s supposed to be feeling guilt, supposed to be shaken. These aren’t just the expected human reactions, the script underlines them. The kid isn’t very good at remorse, or snark.

A classmate asks (Alexandria DeBerry) asks about his father, and Taylor answers “He’s still on life support or whatever” in a classic teen monotone. So maybe this is an acting choice, just a dull one.

Brother Tucker uses his visits to his comatose father for confessions (a cliche of coma movies) and to hit on Dad’s nurse (Katie LeClerc).

Nobody save for Mom lets us see the gravity of the situation.

Life outside the hospital scenes goes on as before, oblivious. Except Taylor gets coached on how to change coach’s mind about getting on the team by cute blonde Bailey (DeBerry), who happens to be dating the team captain, “Connor, the power tool.”

The bulk of “Round of Your Life” is what Taylor does with this opportunity, playing in team tourneys (a little cute golf razzing from the gallery), occasionally dropping back in on the hospital when he’s not trying to steal Connor’s “just talking” girl Bailey.

A hooked shot off the tee?

“Are you sure your last name’s Collins?”

The faith-based elements are scattered throughout the script — a family prayer here, a Fellowship of Christian Athletes meeting there.

But I kept wincing at the inappropriate coma-side banter, an absurdly underplayed and glib “officially dead” debate that may be the worst end-of-life decision discussion ever filmed.

Hara’s low energy performance isn’t the only problem with such scenes, just the most pronounced — deflated, disinterested, exhausted-seeming.

It’s not the only double-bogey that hampers “Round of Your Life,” but it is the most obvious “Round” killer.