His code-name is “T,” in the “Men in Black” fashion. But in the London office, everybody calls him (Liam Neeson) “High T.”

Get it? Good. That’s a rare thing, a joke that lands, even softly.

And in his sage advice to his younger charges in “Men in Black: International,” he leans a bit on squishy, B.S. pop- psyche Oprahspeak entirely too hard.

But what universe put “Men in Black” back on screens after that franchise had shown little sign of life? And who thought F. Gary Gray, who started his career with junk stoner comedies before graduating to thrillers and then the fine NWA bio-pic “Straight Outta Compton” behind the camera? Let’s not blame that on “the universe.”

Oh. Right. He followed “MIB” director Barry Sonnenfeld before, doing “Be Cool,” the sequel to “Get Shorty.” A lifeless retread, so how’d that work out?

“International” reboots the franchise with the fetching, droll Tessa Thompson and the self-mocking hunk Chris Hemsworth, putting Emma Thompson in charge of the New York HQ and Neeson in London.

Tess T. plays Molly, who saw an alien as a little girl and made E.T.’s her life’s work and getting her own black suit, tie and sunglasses her obsession. She grew up to be a hacker and space invader tracker who uses those skills to stalk MIB agents after an assignment back to their headquarters, and from there to bluff her way into a job with O (Emma T., no relation.).

Molly: “I look good in black.”

Just like that, she’s in, and the picture perfunctorily skips to shipping this “probie” (probationary agent) to London, where she finagles sidekick status to swaggering Agent H (Hemsworth), a heroic goof we’ve seen save The Eiffel Tower, Paris and the World from “The Hive,” who are now back and working their way from Marrakesh into Europe in pursuit of…something.

A clever touch. The villains are “Les Twins,” a French dance duo turned into scowling Islamo-menacing aliens that no mere “MIB” can foil.

The new “pet” alien is the sole survivor of a tiny race caught up in the mayhem, a hamster-sized palace guard named “Pawn” (“Pawnie” to his new pals) and voiced, to amusing effect, by Kumail Nanjiani of “The Big Sick.”

Not amusing enough, but that’s kind of what we’re dealing with, here. The remixed theme song plays back at a slower tempo, here, and damned if that doesn’t infest the entire movie. It’s like a slow-walked comedy. So director Gray may have absorbed some, but not all of the Sonnenfeld comic ethos (“Comedy is fast,” he once lectured me. “And close-up.” The bigger the lens, the bigger the face in the camera, the funnier according to Sonnenfeld and now Gray.). 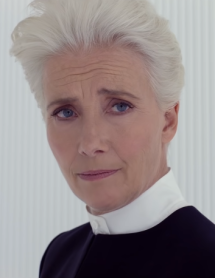 “Mission: Impossible” villain Rebecca Ferguson plays a heavy who shows up later, Rafe Spall is a grumpy London HQ nemesis for Agent H and nobody else is even given the chance to register — no funny alien voices, nada.

Thompson’s best moments are early on, trying to apply for jobs that will get her to the Men in Black. Hemsworth has a little fun in the part, but he’s going at half-speed, like everything else. Watch for one good sight gag involving a tool that’s been a favorite prop in his action career.

The aliens are far more lifelike than they ever were in the Will Smith/Tommie Lee Jones “MIB” movies, but the shiny ray guns are as generic as ever and the shootouts surprisingly dull, if expensive looking.

The universe — ok Sony — had the bad luck to put this movie in theaters in a summer overrun with desultory sequels. You know the dishonor roll — “Godzilla,” “Dark Phoenix” and let’s be brutally blunt, a $billion at the box office doesn’t transform “Avengers: Endgame” into a movie anybody will remember by the time it hits streaming.

Why gamble on a new action picture, period piece, rom-com or true life adventure when you own the rights to “Spider-Man” into infinity and beyond?

Until audiences stop showing up, this is our fate and these will be our choices. And they’re turning out to be no choice at all.