Movie Review: Shakespeare retires and comes home in “All is True” 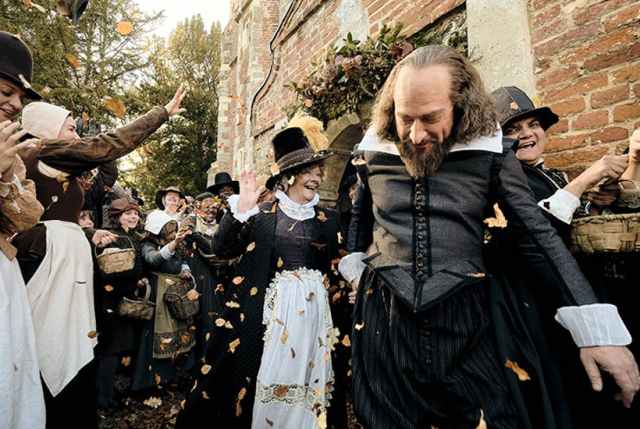 “All is True” is not all true, as we know precious little about the personal life of one William Shakespeare of Stratford-upon-Avon.

But if anybody in the movies has the license to speculate on that life, it’s Sir Kenneth Branagh, whose “Much Ado About Nothing” and “Hamlet” and “Henry V” and “Othello” and other adaptations make him this generation’s Olivier, or better still, Orson Welles when it comes to passing on his love of the Immortal Bard to the movie-going masses.

So here’s a speculative film; stately, handsome — Wellesian, even — about Shakespeare in Retirement. And if it’s not a witty dazzler or moist-eyed appreciation, it’s still a warm homage to the Greatest English speaking playwright, and lovely to look at, to boot.

The title comes from the “alternate” title of “Henry VIII,” the last play Shakespeare produced in London, an opening title reminds us. After the fire that a prop cannon caused that burned down his beloved Globe, the poet and playwright gave up writing, and although not yet 50, retired to the little town where he was born.

Will (Branagh) is resigned to resting on his laurels and his profits.

“You tell stories?” a boy asks.

He returns to a woman he left at home, his older wife, Anne Hathaway (the peerless Dame Judi Dench, the heart of the film), his two daughters, Judith “the spinster” (Kathryn Wilder) and the married Puritan Susannah (Lydia Wilson).

He returns to mourn the little boy, Hamnet, who died decades before, to settle his affairs (having no male heir) and create a garden for the child, an aspiring poet.

The conflicts that greet him and us are over the family’s reputation in these Puritanical times, a scandal that might engulf Susannah and the insults and accusations hurled at Will by Hamnet’s surviving twin.

Judith describes herself as “an angry bitch,” and wails “Why did the wrong twin die?” as if she believes that’s what her father has always thought.

Hadley Fraser plays Susannah’s pious to the point of self-righteous husband, a Puritan’s Puritan who almost appreciates the irony that a man who does not condone acting or the theater stands to inherit most of his father-in-law’s estate.

Shakespeare plays with his granddaughter and the neighbor’s dog, and plays at being a gardener, digging and planting flowers in memory of a son whose funeral he was too busy to leave London to attend.

It’s all rather dry and seriously mundane dramatic material, and all of Branagh’s Wellesian scene-compositions — deep focus shots placing characters in pools of candlelight at different points-of-focus — cannot spice it up.

The best scenes pair Branagh with Dench, for brittle reminiscences over a marriage that lost its fire long ago, and with Sir Ian McKellan and Gerard Horan.

McKellan plays Henry Wriothesley, the Earl of Southhampton, a patron of Shakespeare, the person to whom several of his most romantic poems are dedicated. He was much younger than Shakespeare in real life, the “fair youth” of his love sonnets.

But even though McKellan is thus miscast, their fireside chat has the warmth of intimacy and wit that much of “All is True” lacks. The Earl wants to know why “the greatest man in the Kingdom, after His Majesty, of course,” is “so small,” why he has “lived the smallest life.”

That’s a perfect commentary on this under-educated man who in truth, lived large and cast a giant shadow, but who left London and retired to a life that was everything the Earl said it was — small.  His genius, revealed in his irritated answers to “How” and “Where” questions from a fan, was his imagination and his ability to read widely and adapt history and earlier plays freely in creating a stunning string of timeless comedies, dramas and tragedies.

Horan plays Ben Jonson and brings a nice twinkle to their fireside scene, two great writers, friendly rivals, with Jonson freely admitting to being the lesser of the two “equals.”

None of those grand moments are enough to remove the air of disappointment the whole affair wears, the sense that screenwriter Ben Elton (“Blackadder”) should have found a few more crackling exchanges, given Shakespeare more of the wit we hear in the plays.

But as funereal as it all can feel, “All is True” manages the wistfulness that must have been Branagh’s design, the director of “Thor” and “Murder on the Orient Express” returning to his first love, his idol, for an affectionate if somewhat perfunctory portrait.

Perhaps he has “King Lear” in him, and perhaps the upcoming “Artemis Fowl” and “Death on the Nile” will give him the capital he needs to attempt it. Until then, he’s managed a perfectly pleasant if not wholly satisfying Bard in Winter, and that’ll have to do for now.

1 Response to Movie Review: Shakespeare retires and comes home in “All is True”