Movie Review: German gent discovers the dignity of any job when he works “In the Aisles” 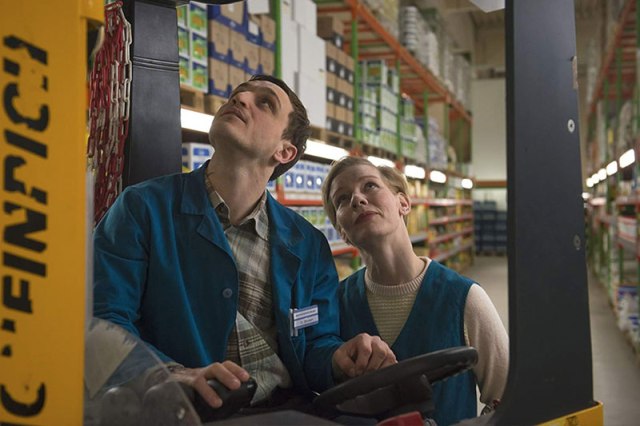 “In the Aisles” is a lovely German elegy to the nobility of work and the family we create while working. It’s a quiet, insightful idyll set in the world of modern retail, seen from the ground level — literally.

Perhaps they don’t call them “groβe kiste” stores in Germany. But they’re the same “big box” warehouses that we find in much of the world — cavernous, dark, bulk-buy discount stores built for bargain hunters.

That’s where Christian, played by Franz Rogowski (“Transit,””A Hidden Life”) finds himself, a young man with a lot of tattoos and a new job — “night stocker.”

Christian is warned about wearing “long sleeves” over his tattoos, is issued his work smock and “our basic kit” like a soldier sent into battle — four pens, a box cutter, and his name tag, and taken to “the hallowed halls.”

He apprentices under the grumpy “I don’t need any help” Bruno (Peter Kurth, sort of the muse of director Thomas Stuber). They prowl the after-hours aisles, loading beer kegs and pasta, crates of liquor and the like from the top shelves onto the bottom ones, where customers can pluck them during the next day’s shopping hours.

Bruno starts Christian on the long path towards getting a forklift license and becoming really useful there. All the “newbie” has to do is “take it real slow.” That goes for almost everybody there, the pharmacy director who plays chess with Bruno on his many, long breaks, older guys not paid enough to be in a hurry, at this stage.

Then there’s “Sweet Goods Marion” (Sandra Hüller, co-star of “Toni Erdmann”). A cocky, slightly older coquette, she breaks rules, flits about on her forklift and flirts with the shy Christian every time they have to stock a shelf together, or find their coffee breaks coincide.

Is she going to affect his work ethic, make him careless? Bruno seems to think so, because she’s married and now he’s “forklifting like a madman because you’re in love.”

Christian, of course, also has a past. He has to wear long sleeves to hide it.

There’s just enough chemistry between the winsome, vulnerable Hüller and Rogowski, who has a soulful, secretive and perhaps dangerous sort of  Joaquin Phoenix presence. But that’s not really what Stuber’s (“A Heavy Heart”) movie is about, any more than it is about Christian, Bruno, Rudi or Marion’s pasts.

It begins with “The Blue Danube” at dawn, a waltz of forklifts greeting the day in this world of eternal florescent lighting. The shift manager, world-weary Rudi (Andreas Leupold) changes the store music when the last customer has exited — Barber’s mournful “Adagio for Strings.”

“Welcome to the night!” he says (in German, with English subtitles).

And as the evening winds down into early, early morning, with Bruno grumping “That’ll do, you pass” to every little thing Christian masters during his company probation, they clock-out and Rudi shakes the hand of each and every employee as they head out the door.

The department stockrooms have nicknames, “Siberia” for frozen foods, “The Ocean” for fresh seafood. And not all departments get along as well as Bruno in booze and coughing Irina in sweets. There’s all this bickering over forklifts, for starters.

“We don’t get along with ‘canned goods.’ With ‘sweets,’ we’re fine. They’re on a friendly warpath with ‘gourmet foods’ and ‘frozen goods.'”

They gossip, with everybody offering advice about “Sweet Goods Marion.” They have a Christmas cookout out back with food fetched from the “expired today” discards. And as dreary as the work is, as isolating as their hours make them, they look out for each other. Or try to. 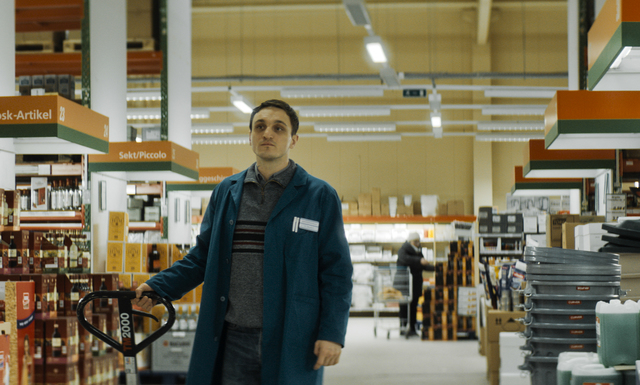 Stuber’s understated, slow-moving drama nicely captures the world of overnight jobs, the perils of “semi-skilled” work (a forklift can kill you) and the loneliness that is both an on-the-job hazard and a German stereotype.

There’s a sad romance to the late hours, a poetry and music to the routine and nobility in taking pride — if that’s the word — in a menial, repetitive job competently done. Stuber takes the time to closely observe the choreography of this world, the shortcuts and “tricks of the trade” that the veteran employees willingly pass on. He celebrates work and “work family” and even the piquant concept of “work wife” in “In the Aisles.”

You don’t have to have done this sort of work or kept these hours to appreciate just how much this movie gets right, lives that have moved beyond “quiet desperation” or ambition, floating into a myopic netherworld of routine.

But I guarantee you’ll never stroll through Costco blithely and blindly again.