Movie Review: “Into the Mirror”

It is very late in the gender identity game to be conjuring up an ethereal fever dream of what’s going on in the head of someone “transitioning,” or thinking about it.

But the British drama “Into the Mirror” manages it with style to burn, and just a smidgen of pathos.

The hallucinogenic visuals and spacey, romantic score by Johnny Jewel of Chromatics give Lois Stevenson’s drama the feel of a long form music video as autobiography, a young man’s journey to donning a wig, lipstick, makeup and a dress.

On London’s Tube, Daniel (co-writer Jamie Bacon, of “Rocketman”) watches a young woman apply lipstick with furtive envy. She’s blonde, so perhaps she reminds him of his late mother, whom we’ve seen in old home video in the film’s opening moments.

He’s new to the city, dodging plaintive phone calls from his Dad urging them to “sort” their relationship, trying to keep colleagues at arm’s length, and haunting the city’s Lost & Found club after hours.

Blu (Beatrice May) is sweet on him. His bullying, handsy boss (John Sackville) keeps emasculating him with the odd “pretty boy” compliment, testing him, touching him and insisting that he join the others for drinks and skirt-chasing.

Perhaps. Perhaps not in the way Harry the Boss thinks.

As Daniel, following his curiosity and temptation, makes his way into smokey, dimly lit Lost & Found, he is challenged by the striking transvestite Jennifer (co-writer Charles Streeter). He finds himself awakening in Jennifer’s care.

“I can’t remember last night,” he rallies, with the doesn’t-know-he’s-gay defense. “I was so drunk.”

“Into the Mirror” concerns itself with Daniel’s state of mind, ducking under in the tub, hallucinating that he’s drowning, flashing back to childhood with every unanswered message from his dad, seeing gender confusion even in the street-lights at the crosswalk he has to traverse to get to the club each evening.

Director Lois Stevenson doesn’t have a lot of dialogue, incidents of consequence or script in general to work with. So she pours her energy into Bacon’s brooding confusion as Daniel, the soft-focus dreams and the dreamscape that is the club — fog machines and piercing jabs of lurid light cutting up the crowded dance floor. 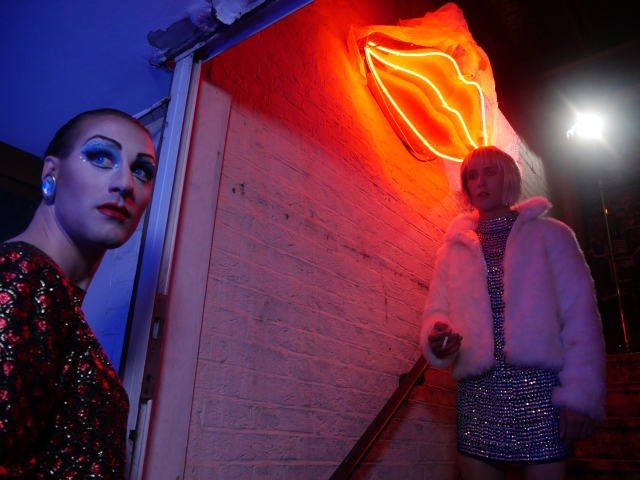 For such a short (65 minute) and narrowly focused film, the co-writers/co-stars and director wrestle with something pretty ambitious, nothing less than a psychological undressing of transvestism.

Perhaps even that view is out of date (if not in Britain), seen as simplistic, and I’ve not kept up with the literature so honestly, I do not know.

But “Into the Mirror” gets as close as any movie ever has to simulating the state of mind of someone conflicted, if no longer confused about his sexuality — the feelings, paranoia, decision making and resolve that takes one from the closet to the drag club.