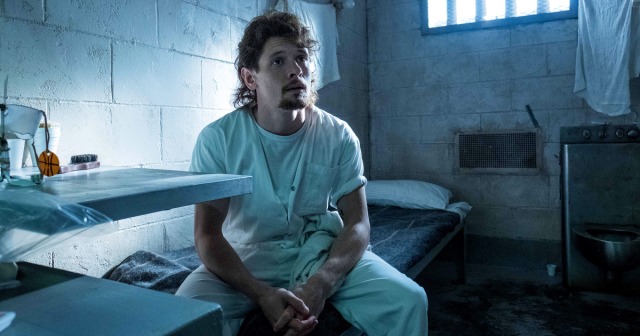 The closing credits of the death row drama “Trial by Fire” show then-Texas Governor Rick Perry defending his state’s enthusiastic application of the death penalty during a presidential debate, to the loud applause of the G.O.P. audience for that forum.

The presumption that “the state,” hated in conservative circles for generations, is somehow infallible in the most serious and terminal application of its power, in defiance of logic and what we know about human fallibility, corruption and general mean-spiritedness, is probably lost on those doing the clapping. “Cognitive dissonance” is but speaking in tongues in many corners of America.

From what we’ve picked up about Rick Perry, he couldn’t even spell it.

And no movie is going to suddenly awaken us to the knowledge that all these people, spending years in prison or even executed, convicted of crimes that later science or evidence proves was false, has put blood on all our hands.

But like the heroine of “Trial by Fire,” a Houston French teacher and playwright played by Laura Dern, it’s comforting to see somebody try.

Elizabeth Gilbert exchanged letters with Cameron Todd Willingham, which led her to pursue experts and witnesses who made his case unravel, basically disproving his conviction with journalists all but indicting the prosecutor, arson investigators and Rick Perry who railroaded a very unpleasant “town punk” onto death row.

The case became an Innocence Project showpiece and was the subject of a documentary a few years back, “Incendiary: The Willingham Case.”

Edward Zwick’s feature film (he did “Glory”) is something of a mixed bag, a long-winded sermon that wastes too much time on preliminaries in the interest of being thorough, when its drama, pathos and rage are all packed into the third act.

The British actor Jack O’Connell (“Unbroken,””71,” “Tulip Fever”) is made over into a seething, short-tempered redneck capable of mercurial mood swings and real violence. Todd Willingham was a wife-beating drunk with a thing for Satanic posters and widely regarded as bad news in Corsicana, Texas.

When his house burned up with his three small children inside it, it wasn’t a huge leap to assume this creep was responsible. As it turned out, the whole town, including law enforcement, never looked at the fire any other way — arson. His trial was for murder, and when he got “the ultimate penalty” that prosecutor John H. Jackson (Jason Douglas) demanded, capital punishment, the view of one and all was “He deserves it.”

But even the most casual viewer of legal eagle TV series will have a laugh or two at the “evidence,” the conclusions leapt to by good ol’boy fire investigators who drawl “ire talks to you. It does not lie,” and the court approved “Dr. Death” psychotherapist.

Naturally, arson investigators saw Satanic pentangles in the fire pattern. Of course the shrink declared the guy was a psychopath, not based on ever meeting him, but on the posters he had on the wall of that house.

And no tearful defense by his wife (Emily Meade of “Money Monster” and TV’s “The Deuce”) or outbursts in court by the defendant could convince anybody otherwise. The defense attorney didn’t even try. 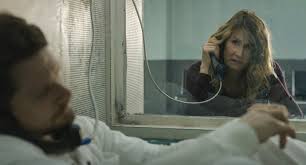 Zwick’s film takes a long interlude to get from the fire and trial to the interest of the one woman who thought he had a case and wasn’t going to let any sloppy public defender (Darren Pettie) scare her off.

“Where’d you get your law degree, missy?”

Zwick and the screenplay spend more time than they should showing Willingham’s heinous prison experience, brutal fights and vicious beatings by the guards, the cruelest of whom (Chris Coy, compelling in giving this guy human dimensions) nicknames him “Baby Killer,” when the entire prison population adopts.

We see the stormy relationship between Todd and Stacy, given a hint of Hollywood “trailer trash heat” here, overdone in the extreme.

This middle acts interlude also allows too much time for sermonizing, which “Trial By Fire” gets down to. McKinley Belcher III is a riveting presence as the jailhouse lawyer/philosopher in the next cell, with “Ain’t no JUSTICE in the SYSTEM” and in Texas, “You ain’t got no CAPITAL, you get PUNISHED,” and don’t expect any mercy or legal exactitude from the Supreme Court.

“If it leans any more to the right, it’ll fall over…They got you in here, they got you GOOD.”

The film throws flashbacks with contradictory accounts of the fire (witnesses, experts, Willingham’s own) at us, and O’Connell nicely suggests mystery in the man himself. Did he do it? Is his guilt related to something less criminal? Is he just playing the playwright lady who is pretty much his only visitor?

Dern brings another version of steel (spined) magnolia empathy to Gilbert, charming when she needs to be, brittle when she forgets herself, not so tough she can’t be threatened by people who know there were Texas shortcuts taken in this case that would burn it to the ground.

I kept thinking of the contortions of Italian justice in the various screen investigations of the Amanda Knox case, where as with Willingham, how the defendant reacted to a death seemed to be all the proof the prosecutors needed. There’s a little Italian ineptitude and outright flim-flammery in an awful lot of American courtrooms, cases like this one remind us.

But that’s what happens when a movie dawdles along the way “Trial by Fire” does. Your mind wanders, fills in the dead spots where “filler” is what we’re seeing on the screen. A vigorous re-edit would have spared us that.

As it is, “Trial by Fire” finds its “Dead Man Walking” heart only after Dern shows up, and only hits its tension-building sweet spot as the “ticking clock” of impending execution winds down. It’s a sermon with too much preamble and a big finish, with some rough-edged nap time tucked in between.