The third film in this Keanu the Killer franchise is all fights, all chases, slaughter and mayhem and dollops of drollery delivered by a cast with a few new faces and one that’s wearing a perpetually scraggly beard to hide his middle age jowls.

Action-packed and production designed to death, ducking and parrying through an arcane hitman/hitwoman universe of its own creation, a world of “fealty” and “service” both “under the table” and from “The High Table.”

No kidding, who needs more “Matrix” when Keanu & Co., Laurence Fishburne included, are giving more than fair value in these stunt-man spectacles?

“Parabellum” — it’s Latin and it’s explained in the picture — takes place at the end of “John Wick Chapter 2,” and chases our “ex communicado” killer from the sanctuary of New York’s Hotel Continental, where he broke the rules and killed a foe under its consecrated roof, to Casablanca.

John Wick (Keanu Reeves) is pummeled, stabbed, shot at, kicked through glass and knocked off a roof.

That’s what all his foes want to know. And if you remember the first film, yeah, it’s like that and it was over a dog. He leaves the new pit bull he acquired in the last film to seek help from a Russian gypsy mobster who is a ruthlessly bloody ballet director (Oscar winner Anjelica Huston), and an old colleague whose secret weapons are attack dogs (Oscar winner Halle Berry).

Wick seeks some relief, a “parlay” perhaps, a negotiation out of this jam he was pulled into, murderously and reluctantly.

But hey, even the villains are, you know, fans. Especially the sushi chef and martial arts teacher/gang leader named “Zero,” a dazzling fighter given great charisma, wit and malice by Mark Dacascos (the new Wo Fat on the “new” “Hawaii Five-O”).

He’s my favorite new character, although Berry’s Sofia kicks major butt in her fights and shootouts. And if we learned nothing from John Wick himself, it’s don’t mess with an assassin’s dog(s).

Of course, the manager of the Continental (Ian McShane) is drolly following John’s exploits with perfunctory “Jonathan, Jonathan, where ARE you going?” for much of the movie.

In this game of assassin’s tag, with every hitman in New York chasing the $14 million+ now on Wick’s head, The Continental is “home base” and safe harbor. John may have to avail himself of it, and the peerless discrete assistance of the concierge Charon, turned into maybe the coolest character in the series by the steely and stoic Lance Reddick.

I nominate Charon for the character best-suited for a spin-off.

The script is all “Your ticket will be paid in blood!” and “Never seen a man fight so hard to wind up back where he started!”

Nothing like joking about the circular, repetitive nature of the “plots” of these shoot-em-up martial arts video game movies in the dialogue. 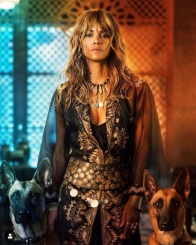 Martial artist and stuntman turned director Chad Stahelski always makes the fights in these films memorable, and does a decent job of keeping “Chapter 3” leaning into the frame, hurtling forward. There are pauses, which don’t so much allow us to catch our breath any more than they allay the weariness the endless mayhem creates.

There’s no hiding the stunt doubles in scenes shot in video-walled glass rooms with glass floors and glass display cases, any more than you can’t NOT see the padding Reeves himself wears for these epic fights, which grow more impressive as the picture goes on.

But back to that “raises the bar” business. During lulls I kept thinking of all the action movies this one bests, at least in its fights and chases (on motorcycles, on horseback). the next “Mission: Impossible” has its work cut out for it, James Bond may have his license revoked and the “bullet time” from “The Matrix” is nothing compared to what a bullet from a silenced automatic weapon does under water.

Reeves hasn’t really discovered Eastwood’s secret, that his best work is done without talking. He’s still a bit of a stiff, and God knows the wear and tear shows in Wick’s wounded sprints in “Chapter 3.” He runs like a middle aged man, which he is.

But “John Wick, Chapter 3: Parabellum” still gets a bloody job done, and still merits all the fan-murderer adulation our anti-hero gets every time he meets a new hunter hoping to cash in that reward money.

MPAA Rating: R for pervasive strong violence, and some language