Movie Review: Life Might get better, if they can just get out of “Little Woods,” N.D.

A boom town is always more attractive on the outside looking in.

For many of those there before the gold, oil, timber or Big Ag rush began, the despair and isolation isn’t lessened by the fact that suddenly a lot of new people pour in. They bring their own problems, jack up demand, drive up prices and strain fragile systems and barely-scraping-by people in an under-regulated, unplanned for deluge.

“Little Woods” is an intimate underbelly drama of quiet desperation set against the North Dakota fracking boom. It’s about two half-sisters stuck in a place where the only good money to be made comes from pole dancing or pill dealing.

First-time writer-director Nia DaCosta may have filmed her Northern Plains tale on the outskirts of Austin, Texas. But she has a firm grasp of the loneliness and hopelessness of lives left behind by a boom in a state where working class women’s career and OB-GYN options are limited.

And having the wider horizons of Canada just across the border doesn’t help.

Tessa Thompson is Ollie, short for Oleander, a twentysomething piecing together a living by hustling coffee and sandwiches to oil rig workers. But a prologue, which showed her burying a bag in the woods, hints at a darker recent past. She’s on probation for selling pills. And her “regulars” are still hassling her for oxy.

In a town where medical facilities are overwhelmed by the increase in population with no spike in state or federal funding, working people in pain have the money to self-medicate, but not the time to wait all day in the emergency room.

There’s a foreclosure notice on the door of the house her mother left behind when she was hospitalized, her former pill supplier (Luke Kirby) and her probation officer (Lance Reddick of “John Wick”) are on her case and her sister (Lily James of the upcoming “Yesterday”) has just shown up, little boy in tow.

Deb is broke, pregnant and unable to lean on her man (James Badge Dale). She’s there because Ollie is the one person she knows who’s reliable. 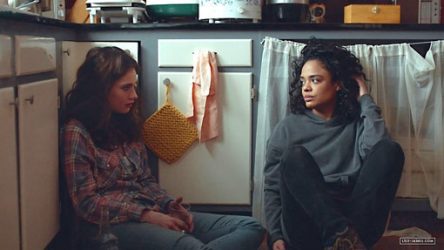 Over the course of a stressful, downward spiral of a week, Ollie will try to deal with the bank, her sister’s problem pregnancy, a job interview and the mounting pressure to get back into the one business that paid her enough to keep the wolves at bay.

DaCosta sends Ollie into those woods to dig up her stash, and to roadhouses, strip clubs, a rodeo, oil rigs and truck stops where she sells her wares. We also track Deb’s misery at a world that is closing in around her ears, raising a little boy by herself and despairing at anything ever getting any better for her or her kid.

“I hope he grows up big and strong and worthless, like his daddy.

There are traces of “Winter’s Bone” in this world of oxy and meth and working class folks addicted to them. The lure of the border, which Ollie used to cross to buy drugs, is reminiscent of “Frozen River.”

As in those films, the stories are driven by stellar actresses in the lead roles, letting us see the weight bearing down on them both. Thompson and James both generate pity and make us feel their frustration.

Kirby stands out in the supporting cast, the smooth-talking good ol’boy who wants Ollie back in the biz, and on his terms — “We’re partners,” he hisses.

The best line? “Your choices are only as good as your options.”

Best moment? It might be in a clinic, in Canada, where neither a nurse nor a patient with forged Canadian ID has to say anything to get across desperation and the sisterly/motherly pity it inspires.

The ending is entirely too pat, considering all the complications that precede it. “Little Woods” lives more on the threat of violence, arrest or homelessness than anything overt. There are no big confrontations that give the story a satisfying finality.

But DaCosta has zeroed in on a place with a lot of money pouring in, and nothing much good coming of it. She has created a modern Western of trapped women who have to make their own way, by hook or by crook, with no cowboy riding up to save them.

MPAA Rating: R for language and some drug material

Credits: Written and directed by Nia DaCosta. A Neon release.