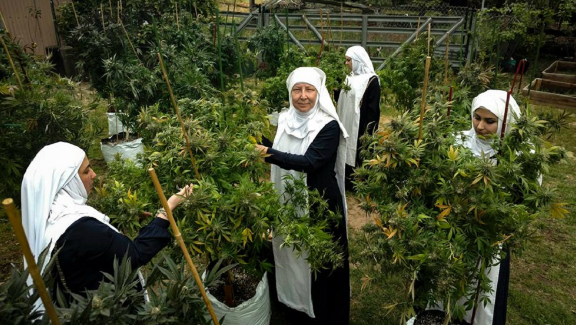 Sure, they don Catholic habits and call themselves nuns, even though they aren’t Catholic or even practicing Christians.

But that’s neither here nor there. Other religions have devout sisters who call themselves “nuns” just to keep it simple.

And it’s barely worth a raised eyebrow that these spiritual “Sisters of the Valley” raise marijuana to create medicinal oils out of this year’s “miracle cure-call,” CBD (cannabidiol). That THC (tetrahydrocannbinol) pot biproduct that gets its user’s high? Not their business. So they say.

But she claims they’re giving away their curative herb-infused oils to those who can’t afford to pay for it and decries local law enforcement, which seems to have a point when it notes a spike in gang-like activity as armed robberies of pot fields become the new crime of choice in their busted, broke, dead-end town. She heralds the job-creation benefits of her business without proof, and lets us see her fellow “sisters” in their habits without us knowing what their story is and how far down the “true believer” rabbit hole they’ve gone with her.

So “Breaking Habits,” a documentary mainly told from Sister Kate’s point of view, could use a serious dose of skepticism in its semi-droll narrative of Meesune’s life and hard times. She’s had it rough, but the leap from wronged-wife, wronged-sister to cannabis crusader needs something more than “She’s suffered, she deserves a break” to cross that chasm.

A little less cheer-leading and a little more questioning — of Sister Kate and her acolytes — was in order.

Writer-director Rob Ryan lets Sister Kate’s compelling story — communications consulting work that took her to the Netherlands, made her a millionaire, and then a victim as her con man husband stole all her money — and how MUCH of that story Sister Kate wants to tell, hijack his movie.

As in, she spent all that time in Amsterdam, came home to the Central Valley of California and settled on pot as her business model, and the two aren’t connected? She talks up the merciful, charitable, compassionate component of what the Sisters of the Valley do, but shows us no actual evidence that they give this stuff away.

Ryan does a good job of setting up Sister Kate’s obstacles — the heel of an ex-husband, the unethical brutish brother, the ten gallon-hat wearing sheriff who calls her “Sisters” “drug dealers, and they’re trying to say it’s medicine.”

The less antagonistic local prosecutor and Sister Kate’s lawyer are more on her side as she struggles to get her business registered, legal and above-board in a town reluctant to join California’s “weed revolution.”

There are laws to fear and rules to flout, or at least bend. We hear of thieves chased off with gunfire and watch the pot preparation process of Kate and her fellow sisters, see the smokey rituals they’ve invented to “bless” the kitchen and the greenhouses where they start their crops.

L.  Ron Hubbard has nothing on them.

And if the ridiculously fertile ground of “the most depressed community in the state” becomes the Napa Valley of weed, the world will remember Sister Kate as its prophet, its pioneer.

But as we see her glassy-eyed in some interviews, and see the drug problems visited on at least one of her children, Ryan is just letting us know that he didn’t get around to telling the full story.

Cast: Sister Kate and the Sisters of the Valley