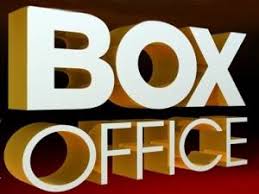 “The Grinch” as they titled it, pretending to have him do something other than steal Christmas, didn’t get the best reviews. But it’s not awful. And they probably wanted to get into the Benedict Cumberbatch business, so money well spent.

“Bohemian Rhapsody,” which opened at a heady $51 million last weekend, defying expectations, is seemingly headed towards $30 million, which was everybody’s prediction for its earning power for this weekend. Saturday could raise that, too.

The fanboy buzzed “Overlord” got a lot of reviews more generous than mine. Still, seeing it in a packed house late Thursday I was sure it would do better than the $11-14 million it was projected to earn. Nope. The “Zombies of Navarone” combat “suicide mission” and monster movie mashup is bombing — $11 million. You’re making producer J.J. Abrams cry, guys!

The other new arrival this weekend, in wide release anyway, is “The Girl in the Spider’s Web.” Sony rebooted the franchise with another “girl” and a totally new script. Which led to weak reviews and a feeble $8-9 million take at the box office.

Give us Stieg Larsson and Noomi Rapace, guys. Don’t give us Spider tattoos in place of dragon ones. Or don’t bother. They never managed to finish the original trilogy with Rooney Mara and Daniel Craig in the lead roles. Why cook up a tale of world conquest originating in Sweden, with one Bourne escape after another, when you couldn’t make a hit out of an international best seller that produced the biggest hit trilogy of movies (made for Swedish TV) ever to come out of Scandinavia?

“A Star is Born” will probably cross the $200 million barrier next weekend.

Tyler Perry’s Tiffany Haddish comedy “Nobody’s Fool” took a dive, but not the usual “Tyler Perry Plunge” of 70% achieved when his movie is so awful word gets around and kills it on the second weekend. A falloff that amounts to 61% of opening weekend? Still in the top ten, call that a “win.”