Movie Review: Can “Widows” pull off the Big Heist?

Co-writer/director Steve McQueen doesn’t reinvent the heist picture with “Widows,” his follow-up to “Twelve Years a Slave.” But he does change the focus, the point-of-view, raising the stakes while piling on characters, subtexts and twists.

It’s as complicated as “The Departed,” which wasn’t a heist picture, and in spite of the fact that the phrase “mean and lean” was invented to describe this corner of the crime movie genre, he gets away with it with this well-cast, uncommonly well-acted sometimes pulse-pounding thriller.

A heist goes wrong in a hail of bullets and a torrent of fire in the film’s opening moments. Harry Rawlings (Liam Neeson) and his gang (Jon Bernthal among them) didn’t make it. All that’s left are ashes, and widows.

And a debt. Turns out Harry & Crew were robbing from the well-heeled gang leader Jamal Manning (John Tyree Henry), who just happens to be running for district alderman in this corner of Chicago. Jamal and his ruthless enforcer/brother Jatemme (say it like it’s French) want that money — $2 million — back. They need it to win the election.

And demanding the money, on pain of death, from the widows of the robbers, could be a non-starter. Just how many assets to the four women have? Even stripping teacher’s union lobbyist Veronica (Viola Davis) of her posh condo, swank furniture and Escalade won’t get them close.

She’s tasked with getting the other widows on board — bridal shop owner Linda (Michelle Rodriguez), blonde beauty with no visible job skills Alice (Elizabeth Debicki) are made aware of the dilemma. New mom Amanda (Carrie Coon) stays out of it. The others are close to broke.

Veronica, queen of looking the other way, has to figure this out with only her punch-drunk driver Bash (Garret Dillahunt), a retired accomplice of Harry’s, and this safe deposit box key.

That’s where her late husband kept his planning journal, research, logistics and scheduling for every job he ever did. And there’s this “next” job, with $5 million on the line, that could save them all.

McQueen never lets “Widows” descend into “Set it Off” or “Going in Style” absurdity, zeroing in on how hard achieving every little step that most heist pictures skim over actually is. Getting a van that can’t be traced? Police auction, fake name. Guns? Visit a gun show, find an overweight gun nut to help hook you up. Finding out where the “safe room” whose blueprints Harry had, the place they’re actually going to rob, actually is? That’s hard.

“How’m I supposed to know this?”

“By being smarter than you are right now!”

One inspired piece of casting — making Daniel Kaluuya of “Get Out” the heavy, Jatemme. McQueen’s camera circles him as he gets right up in the face of those he wants to intimidate, nose-to-nose. Yes, that action has purpose. But sometimes, he’s just getting his sadistic jollies out of somebody he expects to stab or shoot anyway. It’s a monstrous turn which should park Kaluuya on everybody’s “must have” list of actors you want in your thriller.

Davis suffers mightily, lets us believe she’s lost the love of her life (Harry/Neeson is in her dreams and flashbacks) and takes on her burdens with the stoicism that has become her trademark. One thing she doesn’t pull off is acting as if she’s had an adorable lap dog (bearded collie) in her life. She carries him like an ungainly sack of rice, as if she’s never picked up a dog or had one on a leash. Maybe she resents sharing the screen with the pooch, who is a scene stealer (as W.C. Fields warned us).

Rodriguez (“Fast and Furious,” “Girlfight”) has to hide the toughness she carries around as her screen baggage. Debicki, with her model’s looks, makes good work of the “one we’re supposed to underestimate” and Cynthia Erivo makes us forget her in “Bad Times at the El Royale” playing Belle, a late addition to the “gang” who is a walking muscle thanks to the multi-job schedule she keeps as an inner city single mom. 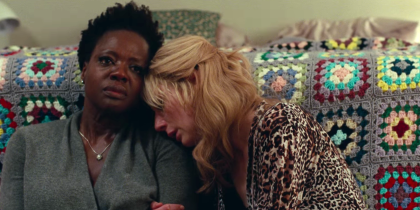 Duvall delivers his usual sound and fury, and Farrell easily suggests the cunning Jack Mulligan uses to get by, the act he puts on as a white politician trying to hold power in an overwhelmingly African American ward.

McQueen includes so many folks in his story (based on a Lynda La Plante novel) that many characters feel underserved and a few story threads lack the fulfilling payoff we want. Jacki Weaver plays Alice’s “use your looks to make money” mom, Lukas Haas is cast against type as a wealthy developer paying for Alice’s company and Kevin J. O’Connor, as a wheelchair bound bowling-alley owner no longer in “the life” so stands out in his couple of scenes that we crave more of his character.

The extra faces make “Widows” feel cluttered, and coincidences and the occasional jarring, illogical scene that comes out of nowhere show us some points on the steep learning curve he was on that he hasn’t mastered.

But he’s still made one of the best thrillers of the year and one of the best heist pictures since David Mamet made “Heist,” the modern benchmark for excellence in violent, complex cinematic capers.

MPAA Rating:R for violence, language throughout, and some sexual content/nudity

Credits:Directed by Steven McQueen, script by Gillian Flynn and Steve McQueen, based on the novel by Lynda La Plante. A Fox release.