Movie Review: “Marwencol,” the documentary that inspired “Welcome to Marwen”

Mark Hogancamp is a sometime cook, dishwasher and busboy at a bar in Kingston, New York, a man who lives a strange and rich interior life with dolls.It’s not what you think.

Back in 2000, Hogancamp survived a savage beating on his way home from work. The “dolls” are his self-designed form of mental and physical therapy.

Using military dolls and Kens and Barbies, he creates vividly detailed World War II scenes set in the imaginary Belgian town of Marwencol, a place where his alter ego is a heroic airman who also runs a local bar. Marwencol is a place where Hogancamp’s imagination takes flight.

Filmmaker Jeff Malmberg’s “Marwencol” follows Hogancamp as he buys his toy militaria, poses and sets up dolls and wanders the roads near his home, creating combat wear and tear by tugging a model Jeep loaded with dolls, often in uniform and named for friends, co-workers, an ex-wife — people whose alter egos he then puts in harm’s way in “his own world” — “Marwencol.” Then he photographs those dolls and the work becomes not therapy, but art.

Hogancamp, an ex-sailor, uses this modeling (and photography) to “get back my senses, my motor skills.” And without saying so, he also uses it to work out his rage at those who beat him all those years ago.

He creates elaborate tableaux of combat scenes, sexual situations, executions and mass murders. He photographs them. Then he buys and builds more models, comes up with another set of poses and tells another story involving these characters in that war in this place that exists only in his mind. 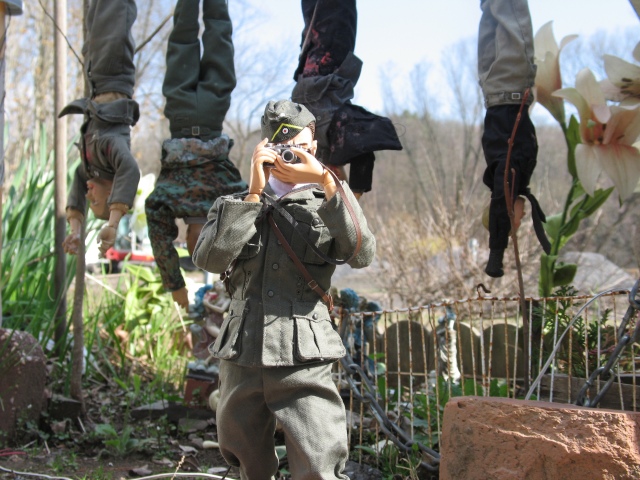 Malmberg presents some of these photos in time lapse, animating the work. He interviews friends, co-workers, the district attorney who handled Hogancamp’s case as well as one person from the art world who can vouch for the aesthetic validity of the artist’s quirky work. The hook here is more the artist’s “real story” than the work, and filmmaker leaves out much of that, saving a big “reveal” for the movie’s third act.

Hogancamp seems a pleasant, offbeat and intuitive fellow who probably takes all this less seriously than those who “discovered” him. He’s a “town character” who had the good fortune to get noticed doing those things town characters do — wandering roads towing a toy Jeep.

I was reminded of the 2004 documentary “In the Realms of the Unreal” about unpublished novelist, artist and mentally-off janitor Henry Darger, who constructed a similarly elaborate fantastical world for himself.

It’s only when those within the art community and filmmakers get hold of them that they are truly transformed. As one publisher says enthusiastically of Hogancamp’s work, “There’s no irony in it.”

That’s also true of the movie, which sorely lacks context and authority in trumpeting these photos of bloodied GI Joes as more than what they were intended, as therapy for a wounded man and his obsessed vision of a world where the wrongs that happened to him can be made right.

See the second trailer to “Welcome to Marwen,” inspired by “Marwencol,” here.