Movie Review: DeNiro and Pfeiffer teach us to never go against “The Family” 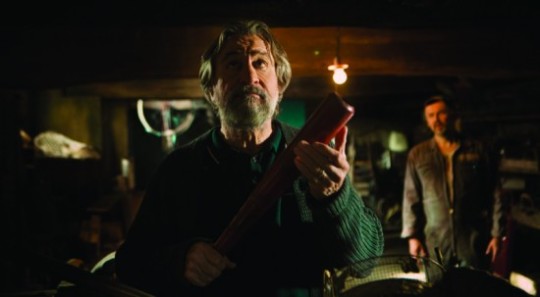 Robert DeNiro, Michelle Pfeiffer and Tommy Lee Jones revisit some blasts from their past in “The Family,” a violent action comedy about a mob family in France, thanks to the witness protection program.
DeNiro does a little “Analyze This” as Gio Manzoni, who ratted out his mob pals back in Brooklyn and now has a $20 million price on his head. He is, he narrates, “a nice guy” who just has to control “my sadistic urges” better. He’s prone to beating people senseless or to death over things like poor service, “disrespect” and the like.
Funny.
Pfeiffer tones down her “Married to the Mob” persona as Maggie, the long-suffering wife, moving to yet another town where these people — “The Blakes,” they’re called this time, need to fit in. Her encounters with rude French salesclerks bring out the pyromaniac in her.
Their kids — Belle (Dianna Agron) and Warren (John D’Leo) — have another high school to reconnoiter, master and have their way with.
And Jones is a milder-mannered version of his U.S. Marshal as the F.B.I. agent who tries to keep these four alive, and keep the incidents with the locals to a minimum.
As they set up shop in small-town Normandy, Gio, or “Fred,” decides he’ll write his memoirs. His cover story now is that he’s “a writer.” Silly Fred, he says he’s doing a D-Day book when he doesn’t know a thing about the subject.
“It’s about the Marines.” Every Frenchman in Normandy knows there were no Marines there.
Maggie finds a charming, ancient church, and curdles the blood of the local priest with her confession (which we don’t hear).
Warren, 14, is bullied, but born to work the angles until he’s had his revenge. And Belle is a streetwise bombshell who sets her sights on a student teacher as her first-ever sexual conquest.
Gio narrates as he types up his book, detailing his family history, papering over his sadistic impulses, impulses he won’t control when he sets out to find out why their old house has brown water coming out of the tap.
“Like Al Capone said, asking polite with a gun in your hand is better than asking polite with nothing.”
Everybody speaks English, which helps the kids and their “fuggedaboutit” parents adjust. Except they don’t. The movie lacks much in the way of “Frenchness,” which is a pity.
And even though the cast is first rate, “The Family” tends to lurch between laughs, with the most reliable humor coming from their over-the-top violence as a way of solving every problem.
Director Luc Besson established his action cred decades ago with “La Femme Nikita” and “The Professional,” and he wrote and produced “The Transporter” and “Taken” movies. But nobody ever accused Monsiuer Luc of having any flair for comedy. The backhanded slaps at French snootiness, softness and over-rated cuisine (“The land of cream”) and his idea of this sort of mob folk — adept at violence and quick to use it — aren’t particularly funny.
Whatever the source material (Tonino Benacquista’s novel “Malavita”), this feels inspired by Netflix’s “Lilyhammer,” about a mobster hiding out in Norway. Besson & Co. should have learned from that series that the fish out of water/culture clash stuff is where the fun comes from. The violence is rare, for shock value.
Here, the mayhem is personal and plentiful and graphic enough to make you wince. Just a bit. The beat-downs are funny enough in their excessiveness, but nobody in this film “gets what he deserves.” And none of the bystanders in the film’s quite-high body count earn their fate.
But DeNiro is the funniest he’s been since “Analyze That,” and one scene — he’s invited to be a guest speaker at a film society — manages huge laughs based on his past filmography.
Besson aims his movie at anyone who’s ever held a grudge at an ill-mannered French waiter or clerk (haughty, and by the way, they’d NEVER condescend to speak to you in English). If that includes you, “The Family” has serves up a little wish-fulfillment payback, with a baseball bat.