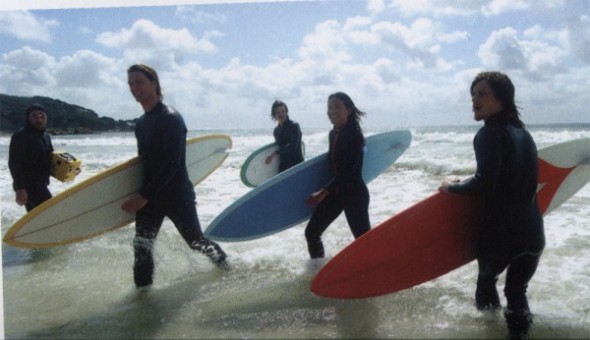 Origin stories, even non-fiction ones, often make good movies, showing us “How the West was Won” or how demonic possession entered pop culture, pre-“Exorcist” and Amityville (“The Conjuring”).
“Drift” is about the birth of the Australian surfing scene and the industry it spawned. It’s a fictional goulash of invented characters, arch situations and a predictable journey from enthusiastic hobby to business, with a detour into the drug trade in between.
But it’s a lovely thing to look at and an entertaining ride through myth, a well-shot and acted film that stays just ahead of the curl and rarely wipes out.
A prologue introduces us to the Kelly brothers as their mom (Robyn Malcolm) sneaks them out of their abusive Sydney household and sets out for a new life without their brute of a father. The boys convince her to stop in remote Seacliff, in Western Australia. That’s where they can surf, skip school and meet their destiny.
Older brother Andy (Myles Pollard) grows up to work in a local lumberyard, rushing his handling of huge logs and scary cutting gear just so he can squeeze in a few hours on the water.
Jimmy (Xavier Samuel) is the long-haired surf god of the two — “a natural” and a great favorite of the girls in 1972 Western Oz.
An accident that almost drowns Andy and busts his long board leads to the boys to discover the short board revolution that’s sweeping the States. And when a pretty Hawaiian surfer, Lani (Lesley-Anne Brandt) and her surf photographer mentor J.B. (Sam Worthington) float into town, they inspire the lads to turn their passion into a business. If only the bank, the competition and their fellow surfers will listen.
“Drift” is their business name,and their business model — “When there’s surf, we surf. When it’s flat, we work.” But even that’s too much the sell-out to the hashish-loving J.B. He’s not about competition, money and all that. He sees a serene, solo surfer on a remote break and turns wistful.
“Can’t buy all he’s got. Especially if he’s not selling.”
The big business of shipping boards hither and yon exposes Drift to the drug trade (heroin stuffed inside boards to get them past customs) and local skinhead/gangster (Steve Bastoni).
And something of a love triangle is set up alongside the sibling rivalry between Andy and Jimmy. They both have the hots for Lani.
“Drift”  is utterly conventional in so many ways. But the relatively unknown cast, the rough hewn setting and startling cinematography — footage that rivals many a surf documentary’s best shots — give it a boost. Pollard stands out in the cast, but Worthington, unkempt, relaxed and not forced to carry a big budget blockbuster like “Clash of the Titans” or “Avatar” or “Terminator Salvation”, is a delight, the very picture of the surfing zen master. As J.B., he keeps that faraway look in his eyes, always in search of that next, undiscovered wave break.
“If God surfed, that’d be his home break.”