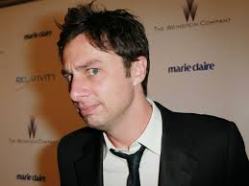 He wanted to get $2 million from fans and other backers to finally make a follow-up to his sensitive indie hit “Garden State.” But when Zach “Scrubs” Braff used the crowd-funding site Kickstarter to do finance “Wish I Was Here,” which he co-wrote, will direct and star in, he stirred up a hornet’s nest of resentment. He already has “access” to talent, production companies, distributors and money, the arguments went. He made a boatload of cash off “Scrubs.” Why isn’t he spending his own money? Kickstarter should be for those just starting out. Wannabes. Or so the reasoning of wannabes went.

But the “Veronica Mars” folks led the way. Fans financing a movie they want to see from somebody they adore. I get it. So, apparently, does Woody Allen.

Now Braff has concluded his campaign, cast Kate Hudson and Mandy Patinkin in his tale of an actor trying to figure out who he is (OK, this sounds so indulgent I may throw up a little after typing it). This project will get a lot of attention when he’s done with it, a leg up for him getting distribution or at least getting it into Sundance. If he blows it, if the script, which no studio would back, as-is, even with his “name,” he’ll be done. Failing — and with Kate Hudson on board, the odds are not good — will be disastrous.