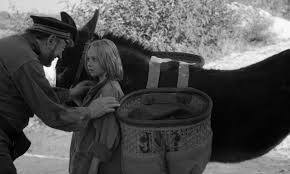 I can’t remember where I saw his most famous feature film, but I distinctly remember catching the cut-and-paste/found objects-animated short films of Walerian Borowczyk at a college film society some decades ago.

I remember that because I mentioned to a professor of mine how this Polish French transplant filmmaker seemed to have taken on the style of Terry Gilliam, the animator and lone American in Britain’s Monty Python comic troupe.

“Oh nooo,” said the academic. “It was the other way around.”

As indeed it was. Gilliam is one of the fans and expert witnesses interviewed in “Love Express: The Disappearance of Walerian Borowczyk,” a documentary about the provocative “avant-garde” animator and live action feature director who was on all the (European) critics’ lips in the 1960s and early 1970s.

Borowczyk went from the odd, surreal and absurdist “Goto Island of Love” to the more overtly sexual “Immoral Tales,” and wound up making “Emmanuelle 5.” If you know anything of the history of “mainstream” sex films in the ’70s and 80s, you remember “Emmanuelle” and you can imagine what the fourth sequel to that would be like.

Academics and critics, and Gilliam (“12 Monkeys”) and other filmmakers, from Andrzej Wajda (“Man of Iron”) to Neil Jordan (“The Crying Game”) and Patrice Leconte, who worked for the Pole before directing “Monsieur Hire,” “Ridicule,” etc., try to break down Borowczyk’s vision, what make his films so fascinating.

And we see clips of archival interviews of Borowczyk, who died in 2006, challenged and try to defend himself from charges that he was a “huge pervert.”

“Who isn’t?” he said (in French, with English subtitles). “I only show what everyone is dreaming about.”

He went to art/film school with Wajda right after WWII, and fled Poland to France where he could exercise “complete freedom” in his art. Within a decade, he was a Cannes darling and one of the most critically-acclaimed filmmakers of a revolutionary era in politics, art and cinema.

Here’s one of his breakthrough shorts.

While the filmmaker’s longtime director of photography, Noël Véry, is the most quoted interview subject, it is Gilliam who is the most instructive. He details how “Boro” and “Goto” and his “completely realized world” influenced not just the animation that helped introduce and separate scenes in “Monty Python’s Flying Circus,” but became the absurdist model for how the show’s episodes were conceived.

As Borowczyk’s career was hijacked by his own infamy, documentarian Kuba Mikurda’s “Love Express” camera captures gestures, the waving about of hands by the various interview subjects as they try to rationalize both his path and his ensuing fate.

That is the successful artistic touch Mikurda brings to the subject of his film. Frankly, despite the testimonials and many clips, I don’t think he makes the sale that Borowczyk is a forgotten master. The entire “Love Express” is interesting, in an academic sense, but feels too much “a European thing,”

By the time censorship was beaten into submission, “Boro” had nowhere else to go. The times changed, and his arty, self-conscious and obscurant films weren’t going to be anything anybody wanted to sit through just to see some skin.

Gilliam sums up the fall better than anyone else as well.